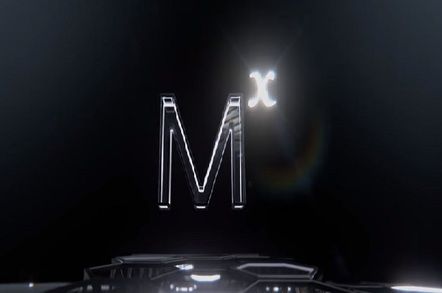 Oooh look ... graphics for something Mx-y

Dell’s proven that even servers can now be the subject of meaningless teaser trailers.

The company last week emitted a 30-second vid spruiking the “PowerEdge MX” range. Said boxen are apparently powered by a “kinetic architecture built for the modern data center” and will be revealed at the Dell Technologies World gabfest in late April, 2018.

The Register reckons the name is probably a riff on and/or the next generation of the PowerEdge FX range, which Dell bills that range “modular” thanks to servers for different roles being offered in different form factors. Dell’s also offered “MXL” networking kit in the past, so perhaps there’s a dash of that range here.

Which would make sense given Dell has hinted strongly that it feels composable architecture has a fair way to go, especially with regards to memory fabrics that make it easier to disaggregate the components of hardware while keeping workloads coherent.

Such an architecture would be a decent prize to reveal at a global gabfest, or to start teasing months ahead of it. That the video mentions a “kinetic architecture” suggests Dell’s cooked something architectural.

Whatever Dell’s built, it might also be something that OEMs might find interesting. Which we mention as Dell last week filed to trademark “DELL EMC OEM FUTUREMAKERS SUMMIT” and has already dangled a conference of that name to run alongside its bigger event.

For now, enjoy the video. That’s some quality close-up action of what looks like a front bezel. And we all know how much difference they make to a data centre. ®