Ever wondered why tech products fail so frequently? No, me neither

Celestial choirs are coming to your screen soon 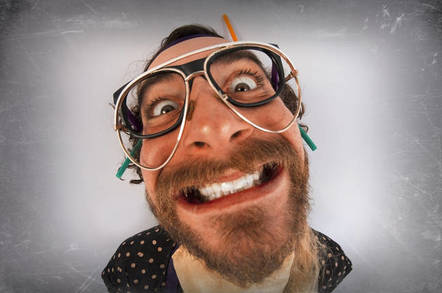 Something for the Weekend, Sir? It's not working. Sorry, this has never happened to me before. Actually it has, frequently, but let that pass. Can we try again in a few minutes?

Foolishly, I agreed to help an ex-colleague with some user acceptability testing this week. It's a chore I swore I'd never do again, such that for my own digital publishing projects I have happily hired other people to do it for me. But I had a lull to fill between other bookings and it made sense at the time to my addled brain, possibly due to having poisoned my bloodstream the previous weekend with too much post-season discounted Christmas chocolate.

I blame the shops which are still selling unwanted choccy Santas and snowmen at 60 per cent off. Who cares if the "consume by" date was 31 December?

So now I find myself toiling away alongside fellow UAT minions, wishing I was doing anything but this. Still, I suppose it makes a break from more intellectually taxing tasks such as taking the bins out or watching daytime TV.

And people wonder why products and systems never work properly.

The Dabbs household, for example, believes itself particularly susceptible to the rapid product failure of retail hardware goods. No matter what I buy, where I buy it or how I go about completing the purchase, it is pretty much a given that it will break down or fall to bits within a short space of time.

When I say short, I mean typically within a day or two, possibly a week at the outset. The products could be tech gadgets, cooking utensils, clothing… anything at all, really, it makes no difference. Stuff the 12-month warranty, I can almost guarantee that the bastard will tear, split, warp, expire, disintegrate into component atoms or spontaneously combust before the first 12 hours are up.

Mme D refers to this phenomenon ironically as "The Dabbs Luck". Since shacking up with yours truly, she too has been forced to share this curse and knows it to be true.

Sometimes we have opened our boxed purchases at home to discover they are already in pieces or parts are missing or are accompanied by the wrong instructions. On a few occasions, the box contained a completely different product to the one pictured on the box itself. Once, I opened a box at home to find it contained lots of packaging but no product.

Putting The Dabbs Luck to a sterner test, I once made a shop purchase and carried it directly from the payment till to the returns desk without even looking inside the box. Sure enough, when they opened it up, they found that the product inside was knackered and needed replacing.

It's not just classic white goods, either. I've had coffee shops serve me a caffe-latte in which they forgot to include any coffee. My cup of frothy milk was actually quite nice but I had to fight an overwhelming desire to go to bed afterwards.

Just this week, I was presented with a new set of (expensive designer) spectacles by my optician and, knowing how these things go, I nervously joked that I hope they'd last the day.

They lasted less than two hours.

Emitting a loud "crack!" they actually exploded into several plastic artefacts while sitting on my face as I was reading. I dunno, maybe I was looking through them too hard.

Put this down to poor engineering if you like but that's too glib to be a full explanation. I prefer to blame inadequate prototype testing, where design flaws, manufacturing niggles or, in my UAT example above, a system's unsuitability to real-world requirements might be nipped in the bud.

So my heart was warmed when I read about a recent OnePoll survey into people's attitudes to technology product reliability, commissioned by Critical Software's TestYourTech brand. It seems I am not alone in suffering from The Dabbs Luck.

Just 52 per cent of the 2,000 survey respondents said they believe the technology in their lives is properly tested. One in two said technology fails them at least once a week.

Most revealing of all, 98 per cent said: "Reliability is an important factor when it comes to using technology". This means 2 per cent do not think reliability is important. Unfortunately, I suspect this 2 per cent are sitting alongside me this week doing UAT testing. Time to get a grip.

Awaking from my reverie, I buckle down to the job I am being paid for – typically 18 months after I submit my invoice because their accounts system keeps breaking down – and work through those UAT scripts again from the top. I deliberately press the wrong keys in increasingly fantastical and unlikely combinations to see what will happen. I take note of each result: Fail, Fail, Fail, Fail, Fail, Fail, Fail, Fail.

My efforts are unappreciated by the project managers. They don't seem to like it when I hand in my annotated report forms with all those "Fails". Evidently, they are my fault for not testing within the narrow confines of the script and can therefore be safely ignored. The roll-out is next month, I hear.

It's just as well I didn't tell them about the esoteric Easter Egg I discovered, by which pressing G-O-H-O-H-O-9-O repeatedly on an extended keyboard causes the temperature of the room to drop by five degrees, tectonic plates to shift 3mm and reveal the Holy Ghost on-screen accompanied by angelic hordes and a celestial choir.

Alistair Dabbs is a freelance technology tart, juggling tech journalism, training and digital publishing. He has the highest respect for professional software testers. This isn't necessarily because they all do a good job. It's because software testing, outside the realm of games at least, is so very boring that anyone who chooses to do it for a career deserves a pat on the back; possibly also a pat on the hand.

Something for the Weekend, Sir? Some people will believe anything

Roundup Little good news to increase your trust in machines here, to be honest