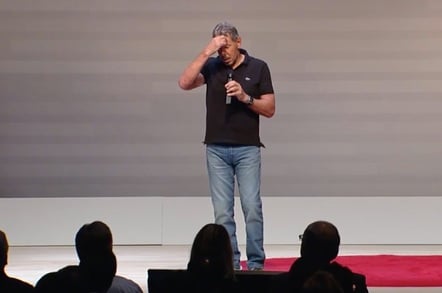 Oracle's acquisition of NetSuite was a "stage-managed" process rife with conflict of interest, lawyers for one of Big Red's shareholders have argued in a case alleging the biz overpaid for the cloudy ERP firm.

One of Oracle's shareholders is claiming that this was a deliberate overpayment to benefit Big Red founder and CTO Larry Ellison, who also had a 40 per cent stake in NetSuite at the time.

The Southeastern Pennsylvania Transportation Authority (SEPTA) filed a derivative suit in Delaware Chancery Court against Ellison in May last year, some six months after the deal was approved.

The suit also names co-CEO Safra Catz and the three directors on the special committee that signed off on the merger.

SEPTA claimed that Ellison was able to exercise too much control over the deal – which it alleges earned Larry and his family some $4.1bn – because of his position of power at Oracle.

In oral arguments in the case yesterday, Joel Friedlander, acting for the shareholders, said Ellison was known for controlling the business with an iron fist and suggested board members were unable to say no to the deal.

He argued that, despite moving from Oracle chief exec to CTO, "as a practical matter, his [Ellison's] influence is undiminished". Friedlander also suggested that Ellison's notoriously "controlled mindset" in running his business might explain why the committee members endorsed the deal.

In SEPTA's original filing, the investor said that the three committee members and Catz were conflicted due to years of personal and workplace relationships with Ellison.

"As the directors know, if they fail to approve Ellison's proposals... they will be removed from their lucrative positions," the complaint said.

However, Oracle's lawyers yesterday looked to dismiss the suit. Peter Wald of Latham & Watkins LLP said the deal was a "playbook" acquisition and that the use of an independent special committee shielded it from conflicts of interest.

"All of the evidence in the record is that this was as sterilized as it can get, and you don't see anything from the other side but a conspiracy theory," Wald is quoted as saying.

"The board's approach to this transaction is exactly what the courts have encouraged and should continue to encourage. It follows this court's playbook to a T, to ensure arm's-length bargaining."

The premise of the case – that the deal benefitted Ellison to the cost of Oracle's shareholders – also runs against concerns at the time of the deal that it was selling NetSuite short.

Indeed, when the acquisition was proposed, T Rowe Price Associates, the single largest unaffiliated shareholder of NetSuite, pushed back against it.

It claimed that Ellison's involvement would have put off other potential investors, and meant NetSuite's board had failed to consider other options.

Vice chancellor Glasscock is taking the arguments made in the case brought by SEPTA under consideration. ®