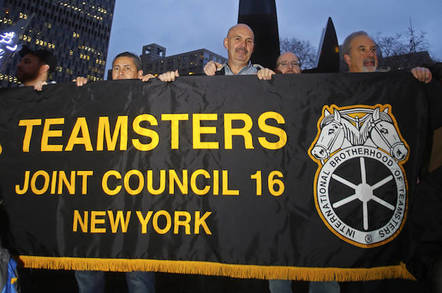 The Teamsters labor union wants package delivery giant UPS to promise not to replace any of its drivers with drones and self-driving trucks.

The demand was made as part of ongoing negotiations between UPS and its 260,000 union workers in North America.

The Teamsters presented the biz with a 91-page document detailing demands, that, among other things, include asking UPS to commit to not use quadcopters or self-driving vehicles to carry out deliveries that would otherwise be done by a Teamsters human.

The proposal – obtained by The Reg – specifically calls for UPS to prohibit "driverless trucks, drones, robots, and other driverless technology."

The union is also asking UPS to commit to hiring additional workers to bolster its ranks and eliminate night-time deliveries.

UPS did not specifically address the drone demands, but did offer The Register a blanket statement today:

UPS will negotiate in an environment of mutual respect, and looks forward to rewarding employees for their contribution to our success. We are focused on a contract that provides the flexibility needed to remain a highly competitive provider of reliable service, given the challenge of an increasingly crowded logistics segment. We look forward to working together with union negotiators on our shared obligation to position UPS for success in the future.

While UPS has not formally rolled out a drone delivery service, the corporation has dabbled with the technology for some time now. Last year, the delivery service demonstrated a prototype delivery method where a driver packs the parcel into a cage that is then flown by a droid to drop off at its destination.

UPS said at the time it was exploring using drones as a way to get packages to remote locations that would otherwise require a driver to make a long, costly trip. Apparently, however, the experiment spooked the Teamsters enough to demand UPS now disavow any plan to use drones.

UPS is not the first outfit to look at drone delivery. Amazon has made no secret of its plans to deliver packages by quadcopter, and last month America's airspace watchdog floated a set of proposed rules for drone delivery services. ®

Altitude Angel to use cash to swoop on Europe, N America