Dragon lady who told us our true names dies aged 88 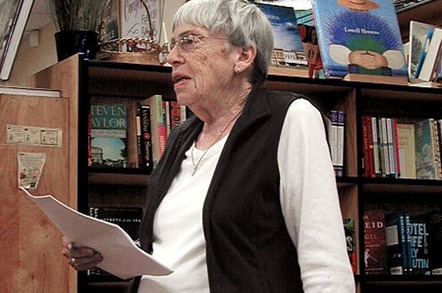 She was a multiple Hugo award-winner ("speculative fiction", anyone?) and bagged about every other sci-fi/fantasy award you can think of, and for a good reason.

The Dispossessed won Le Guin the holy sci-fi trinity – a Locus, Nebula and a Hugo – and Reg readers voted for it back in 2011 as one of our "best sci-fi films never made". The novel is about a physicist who ultimately invents instantaneous comms across galaxies via a device called an "ansible", but first has to escape anti-intellectual forces at play on his own planet, a crappily organised would-be anarchic utopia (though they should have used big data, as The Reg's Trevor Pott has noted), for a rapacious but beautiful capitalist planet where the rich, served by an underclass, live in unimaginable luxury (it carries the subtitle "An Ambiguous Utopia" to give you a bit of a hint). If you've not read her, that all sounds pretty plotty and in-your-face didactic, but Le Guin's work is anything but. She wrote in tough, workman-like prose, with the stitching so delicate and fine you hardly noticed it was a fiction.

It was this quality that made her such a fine writer. Those of us who enjoy our aliens, spaceplanes and dragons are not unused to being pulled about by authors less skilled, yanked out of the feeling of "being there" by hokey writing, clumsy dialogue and hackneyed phrasing. Her novels were real art. The Left Hand of Darkness, a trek across a freezing snowy wasteland with an unthinkably alien companion, is not just good science fiction; it is exceptional literature. It is spare, compelling and mesmerising – like a weird, wonderfully savoury, perfectly made soufflé.

A lot of her work – like that of all the literary greats – had to do with thought experiments: What if the relationship between power and gender were different; what if you didn't – for good or for bad – have to think about whether you wanted to have sex with someone when you interacted with them? What of the profit motive and humankind's uneasy relationship with war, the environment and its own nature. Her work was, of course, unflinchingly feminist, humanist also.

There is a yellowed, slightly dog-eared copy of 1974's The Dispossessed, complete with art nouveau-style illustration, on the shelf of the William Morris Gallery in London. It has a placard beneath it that reads something like: "This is the type of thing Morris was banging on about". (Morris was a 19th-century English textile designer and social activist who brought art to the 'lower' classes by mass-producing tiles, wallpaper and other fine furnishings.)

It seems an odd choice by the curator; it's the only book in the display that wasn't literally written by a Morris compatriot or a known influence on him, and she was born years after he died. They were certainly of similar political bent, wanted to make art affordable etc, but only if you squint a little. The book was also written before I was born. There's probably a connection I didn't understand; perhaps the cover art was "a Morris" (he also painted and wrote poetry) – the terse note propped up against it doesn't make it clear. But I like to think the curator was grabbed by the throat by her prose, like I was, and was simply looking for any excuse to say: "Here. Sit down. Read this! No really. Read this."

Le Guin wrote scores of novels – The Dispossessed was one of several loosely connected books known by fans as the "Hainish" cycle. If that takes your fancy, you might like to start with the wonderful The Left Hand of Darkness or The Word For World Is Forest. If you're not inclined to buy one – an idea Le Guin would likely have supported – you can find a copy in your local library here (just change the location parameters to find yours).

The rather prematurely named Earthsea Trilogy (start with A Wizard of Earthsea – you've got another five or six after that) is also excellent and remains a major influence on fantasy writers working today. It felt honest. It feels honest. You should read it.

She also wrote poetry, novellas, multiple collections of short stories – Buffalo Gals stands out here and includes a magical story written from the perspective of the werewolf's wolf family – and was working on the latest in a young adult series as recently as last month. While her books make you feel like you're in an "alternate" universe, she didn't appreciate comparisons made between "alternative facts" and inventive fiction, saying:

Facts aren't all that easy to come by. Honest scientists and journalists, among others, spend a lot of time trying to make sure of them. The test of a fact is that it simply is so – it has no "alternative"... In most times, most places, by most people, liars are considered contemptible.

She also wrote: "People who deny the existence of dragons are often eaten by dragons. From within."

She was a good read. Vale, dragon lady. ®

Analysis Um, which hardware would that be, then?

So that's how Game of War can afford her

Is this the real life? Is this just fantasy? Self-processing flash drives, we'll need more capacity