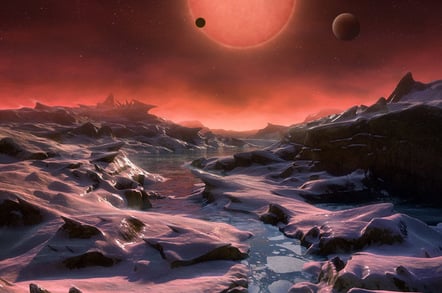 A team of scientists have identified two out of the seven planets in the Trappist-1 system as the most likely to be habitable, according to a new study.

Since its discovery, announced earlier last year, the Trappist-1 system has been of great interest to astronomers – and anyone else sick of Earth, to be honest.

A previous study picked out three exoplanets in the habitable zone. Now, a paper, to be published in Astronomy and Astrophysics (here's the free Arxiv version), has narrowed that number down to two, in terms of hospitable conditions.

Located about 39 light years from our home world, Trappist-1 is similar to our Solar System. It has seven planets – rather than our eight – circling a cool red dwarf star. The exoplanets are similar in size to Earth, and researchers have previously detected clues that liquid water may exist for the outer planets e, f and g.

The planets have been assigned an alphabetical letter beginning with b, the most inner planet, spanning all the way to c, d, e, f, g and h, the furthest one from its star.

For this most recent study, boffins calculated the planets' mass, surface temperatures, and how heat is transported by convection and tidal heating to decide the chances of liquid water being present.

Amy Barr, a senior scientist from the Planetary Science Institute, a private, nonprofit corporation focused on Solar System exploration, said: “Assuming the planets are composed of water ice, rock, and iron, we determine how much of each might be present, and how thick the different layers would be. Because the masses and radii of the planets are not very well-constrained, we show the full range of possible interior structures and interior compositions.”

The planets in Trappist-1 may experience tidal heating from gravitational friction, since they all have eccentric orbits close to their parent star and have a range of surface temperatures.

In a previous study – led by Eric Wolf, a post-doctoral student at the University of Colorado Boulder in the US – it was believed that none of them were inhabitable at all due to the extreme temperatures. They were either blistering hot or frozen cold.

However, the eggheads working on this latest study have found the opposite. They have pinpointed the planets in the middle – d and e – as having the highest chances of harboring life. Both have moderate surface temperatures, small amounts of tidal heating, and retain a good level of heat to avoid runaway greenhouse effects that would boil away any water.

In fact, they reckon planet d may be covered in an ocean. The outer planets f, g, and h, meanwhile, are ice worlds – they “are undoubtedly H2O-rich, with thick mantles of ice, possible sub-surface liquid water oceans, and solid surfaces composed of ice,” according to the paper’s summary.

So far, the planets' properties are down to educated guesses. Boffins have narrowed the seven-planet system down to two alien worlds – d and e – with seemingly friendly conditions. Now, where's that faster-than-light warp drive, eh? ®

National effort on Saturday to shine light on planetary plight