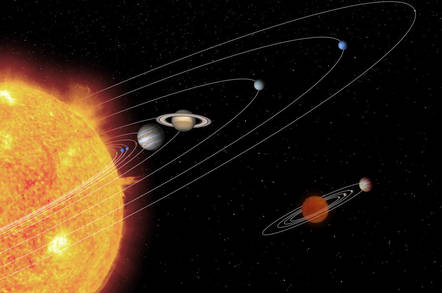 The official definition of a planet should be updated to include an upper mass limit, so scientists can agree on whether a large newly found celestial body is either a huge planet – or a tiny failed star.

That's according to Kevin Schlaufman, an assistant professor of astrophysics at Johns Hopkins University in Maryland, US.

He proposed the upper limit in a paper published in The Astrophysical Journal on Tuesday. In it, he suggested official planets should have a maximum mass of about ten times that of Jupiter – or ten times 1.898×1027kg. Anything more, and you're wandering into brown dwarf territory, which have a mass between that of the heaviest gas giants and the lightest stars.

Any change to the official definition would have to be approved by the IAU – the International Astronomical Union, which you may recall stripped Pluto of its planet status in 2006, demoting it to a dwarf world.

Right now, it’s tricky to distinguish giant planets from brown dwarves when scanning the heavens for new bodies because the definition for a planet is open-ended.

On the one hand, you have massive exoplanets with rocky cores and gaseous envelopes, like Jupiter, and on the other, you have tiny stars incapable of burning hydrogen to form helium – unlike main sequence stars like our Sun. An upper mass limit on planets would draw a clear line between the two types of body, simplifying classification.

Brown dwarves are generally more massive than giant exoplanets, but mass alone isn’t enough to tell the two apart. Scientists have to look at the boundary of how both objects formed, Schlaufman explained to The Register.

Planets form by accreting mass to build a core, whereas brown dwarves are created by the gravitational collapse of material. It means that massive planets are more likely to be found around stars containing heavy elements like iron that contribute rocky material for a planet’s core. Brown dwarves, on the other hand, don’t have this requirement.

By analyzing 146 planetary systems, Schlaufman found that objects more massive than ten times the mass of Jupiter don’t really orbit stars with lots of elements. Those types of stars, therefore, are unlikely to form planets, and are clearly not planets themselves.

Objects with ten times more mass than that of Jupiter should be considered as brown dwarves, and not planets, he therefore argued.

Schlaufman’s definition of a planet ties mass to the same planetary formation processes for planets like Jupiter, Saturn, Uranus and Neptune.

“Astronomers have sought to apply such a definition in the past, but they were defeated because of the difficulty in uniquely determining how billion-year-old objects like exoplanets formed," he said. "The observations and analyses I presented in my paper overcome this problem and enable the practical use of my proposed definition for this the first time.