Could be the end of the road for Opportunity, too 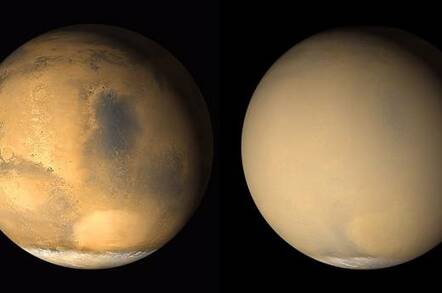 It's highly likely that Mars is going to suffer one of its periodical planet-wide dust storms this year – and NASA is concerned the event could disrupt its operations on the Red Planet.

When the American agency's Mariner 9 spacecraft became the first probe to orbit another world – specifically, Mars – in November 1971, scientists were surprised to see that the entire Red Planet was in the throes of massive dust storms. We have since learned that such phenomena aren't unusual, and occurred in 1977, 1982, 1994, 2001, and 2007 – and are due again this summer.

NASA boffins have warned that the solar-powered Opportunity rover, which will begin its 14th year on Mars on Thursday, will have to "hunker down to save energy." More concerning is the Interior Exploration using Seismic Investigations, Geodesy and Heat Transport (InSight) mission to land on the planet, due to launch in May – and reach the unforgiving alien world later this year.

The massive storms throw enormous amounts of dust into the atmosphere, and there's no rain to wash it out. Wind speeds rise to around 26 metres per second, the surface cools down, and the upper atmosphere heats up, and that may mean NASA needs to recalculate InSight's plans.

The InSight lander is due to reach Mars in November, and will release a couple of cubesats before heading down to the surface. The landing site is near the equator on the western Elysium Planitia, about 373 miles (600 kilometres) from where the Curiosity probe touched down.

After entering the atmosphere at around 14,100mph (6.3 kilometres per second) the probe will slow down while its heat shield ablates, and will then deploy the supersonic parachute NASA invented for Mars missions. After jettisoning this, the lander will fire up 12 rockets that should lower it gently onto the surface.

A global dust storm around that time could complicate things immensely. The increased amount of dust in the atmosphere could sandblast the heat shield and cause extra wear on the parachute. A windy environment also introduces much more risk into the rocket landing.

The nightmare don’t end there. InSight is powered by two circular solar panels 7.1ft (2.15m) across. These are scheduled to unfurl 16 minutes after landing, after the dust from the rockets settles, but NASA might have to delay this if a storm is ongoing because, apart from the storm blocking the Sun's rays, any dust that lands on the panels would reduce their long-term performance.

The InSight team are drawing up contingency plans and estimating the likely effects. If they determine it's too risky, the mission, which is already years late after one of the instruments was damaged in testing, may well be delayed further. ®