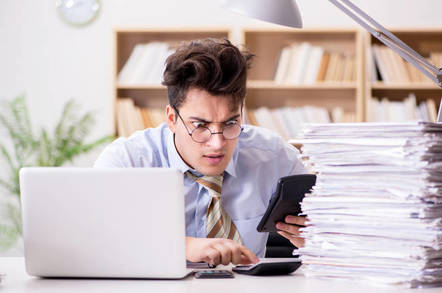 The UK's Ministry of Justice's system of monitoring criminals with electronic tags has been blasted as a "catastrophic waste of public money" in a damning report by MPs..

The scheme was due to be completed in 2013 but is now running five years late at a cost of £60m to the taxpayer with further delays expected. It has incurred £9m of losses which cannot be recovered.

"The Ministry told us that owing to further delays, the new tags are now expected to be ready in early 2019," the MPs' Public Accounts Committee warned.

The programme was originally expected to reduce the cost of tagging crooks by between £9m and £30m a year but has failed to deliver any tangible benefits so far.

Geoffrey Clifton-Brown MP, deputy chair of the Public Accounts Committee, said: "The Ministry of Justice took an all-singing, all-dancing approach to what could have been a relatively simple procurement exercise.

"The evidence to support a wholesale transformation of the tagging system was weak at best but the Ministry pushed ahead anyway.

"This ill-fated adventure in the possibilities of technology has so far costed taxpayers some £60m.

"The new tags are expected to be rolled out more than five years later than planned and, even then, the system will rely on the same form of technology that was available when the programme launched."

He said the ministry has admitted it got the project badly wrong but said its failures do not excuse an approach that disregarded fundamental principles that should be applied to spending public money.

"It must act on lessons learned from this programme. We urge it to demonstrate a commitment to doing so by publishing details of the steps it is taking to avoid such wasteful mistakes in future."

The programme has been subject to serious and successive delays, including two failed attempts to buy up-to-date tagging tech.

During the original procurement process, the ministry discovered that it had been overbilled by the existing suppliers of electronic monitoring services – G4S and Serco – which resulted in a repayment to the department of £179m. The Serious Fraud Office is investigating the case.

The ministry noted the potential for conflicts of interest in the programme were exacerbated when Capita also took over the delivery of the existing electronic monitoring services after Serco and G4S were stripped of the contracts.

It went on to appoint a smaller firm, Buddi, as its preferred bidder to develop and produce the new tags in August 2013, but ended the company's involvement in March 2014 after being unable to resolve fundamental differences.

Another firm, Steatite, was then handed a contract to develop and produce the tags in July 2014, despite Steatite scoring below the minimum benchmark in the procurement. The ministry ended its contract with Steatite in November 2015 after growing delays to the programme.

The costs it has incurred so far include paying Steatite £4.4m (plus VAT) in compensation for ending its contract, on top of the £3.3m (plus VAT) paid during Steatite's contract.

The department is now piloting GPS tagging to better understand where decision-makers within the system will choose to use location monitoring as a sentencing option.

"The pilots should have been undertaken at the beginning of the procurement process, not four years later," said the National Audit Office. "The Ministry asserted that it was learning lessons from the pilots which will inform the future delivery of the programme, but it did not explain what these were or how they would change the programme in practice."

It warned the department has 16 major projects in addition to electronic monitoring, almost all of which are rated amber to red – not great, basically – in terms of confidence in their ability to deliver.