Replacement robot hand didn't work, so they turned it off, and yes, turned it back on again 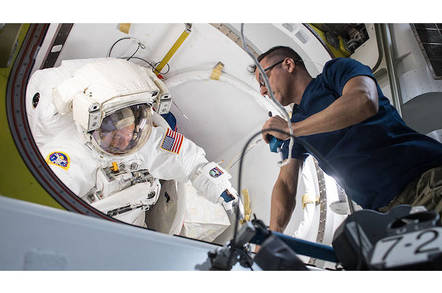 The point of the spacewalk was to replace a component on Canadarm2, one of the International Space Station's robotic arms. The Latching End Effector (LEE) is the “hand” at the end of the arm, used to grapple and release cargo spacecraft.

Mark Vande Hei and Scott Tingle, flight engineers for Expedition 54, spent 7 hours and 24 minutes on the replacement, after retrieving the 200kg replacement LEE from the external pod it's occupied since 2009.

Five hours into the replacement effort, ground controllers tried to power up Canadarm2 – and that's when the software glitch emerged.

Quoting from the Webcast, Space.com said NASA TV's commentator Rob Navias explained: “The Canadarm2 software is not communicating properly with the newly installed spare LEE … They believe the problem may be associated with this mate/de-mate mechanism that connects all of the electrical and communications connections for the arm, so they're going to do a cycle of that and see if that corrects the problem.”

Rebooting the robotic arm cleared the problem, but that set back the astronauts by roughly an hour.

Because of the US government shutdown, the spacewalk started on time but the Webcast of the event didn't start until two hours of action elapsed.

NASA said: “The spacewalk was the 206th in support of space station assembly and maintenance, the third in Vande Hei’s career and the first for Tingle”.

Vande Hei is scheduled for another walk on January 29 to stow a spare LEE, removed from the robotic arm last October, for future use. ®