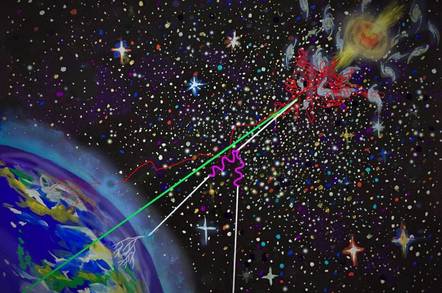 A new model has traced the origins of high-energy neutrinos, cosmic rays, and gamma rays to powerful jets billowing around supermassive black holes.

Known as cosmic messenger particles, these neutrinos and rays carry huge amounts of energy, travel insane distances across space, and can be detected when they reach Earth – yet their source wasn't completely clear. Where exactly are these little aliens from?

Now, a pair of boffins in the US, on the hunt for these highly energetic and mysterious particles, have developed the first theoretical model that can explain how they came to be formed, and from where.

It all comes down to the extreme conditions found around supermassive black holes, according to their paper published in Nature Physics on Monday. Under these turbulent conditions, gigantic reservoirs of cosmic rays are blown through space by powerful jets surrounding incredibly huge black holes, and form neutrinos and gamma rays.

Crucially, all three types of cosmic messenger – the rays and the neutrinos – have roughly similar energies, allowing the researchers to link them together and figure out their shared origins – the black holes.

Kohta Murase, coauthor of the study and an assistant professor of physics and astronomy and astrophysics at Pennsylvania State University, said: “The fact that the measured intensities of very high-energy neutrinos, ultrahigh-energy cosmic rays, and high-energy gamma rays are roughly comparable tempted us to wonder if these extremely energetic particles have some physical connections.”

Together with Ke Fang, a postdoctoral associate at the department of astronomy at the University of Maryland, Murase found that these neutrinos and gamma rays are produced when cosmic rays smash into other particles floating around in space.

These neutrinos and gamma rays are effectively the “daughter particles” of the cosmic rays. Since the parent particles – the cosmic rays – are highly energetic, the daughter particles inherit a comparable chunk of that energy too, meaning they all have similar energies. That gave the academics a clue that all three were linked. “It demonstrates that the similar energetics of the three cosmic messengers may not be a mere coincidence," Murase said.

The scientists looked at active galactic nuclei (AGN), a bright central region in galaxies home to supermassive black holes gorging on matter. As they swallow up material, an AGN shoots out powerful jets of electromagnetic energy close to the speed of light. These are the aforementioned jets that spread out the cosmic rays that form the daughter cosmic messengers.

“The highest-energy cosmic rays are produced by powerful jets of active galactic nuclei and are accelerated by Fermi acceleration mechanisms or magnetic reconnection processes,” Murase explained to The Register.

They calculated how the cosmic rays from AGNs travelled inside galaxy clusters and in outer space, and figured out the number of neutrinos and gamma rays produced through particle collisions. To their surprise, the power outputs and intensity measurements from their model matched the same levels as those observed in the universe.

Murase and Fang’s model explains that these high energies are reached during particle collisions between cosmic rays and the gas contained in galaxies.

“[It] paves a way to further attempts to establish a grand-unified model of how all three of these cosmic messengers are physically connected to each other by the same class of astrophysical sources and the common mechanisms of high-energy neutrino and gamma-ray production," Murase said.

"However, there also are other possibilities, and several new mysteries need to be explained, including the neutrino data in the ten-million mega-electronvolt range recorded by the IceCube neutrino observatory in Antarctica. Therefore, further investigations based on multi-messenger approaches - combining theory with all three messenger data - are crucial to test our model." ®