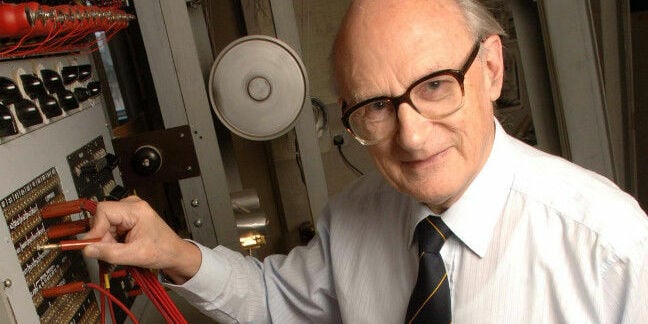 A biennial award backed by the National Museum of Computing for "achievements in computer conservation or restoration" has opened its nominations.

The Computer Conservation Society's Tony Sale Award, first given out in 2012, is looking "to recognise a singular achievement in the area of computer conservation and restoration" and to "give public recognition to such work worldwide".

The prize is named after the conservator of the same name who led the team that rebuilt the Second World War code-breaking icon Colossus, and campaigned to rescue Bletchley Park from demolition. Sale also helped to found the National Museum of Computing and the Computer Conservation Society, which runs the awards with help from TNMoC.

Individuals and groups can enter, and their work can be from any period in computing history and based on both hardware and software. The projects will be judged on originality, completeness, ingenuity, impact, outreach and publicity.

After nominations close on 30 June, the judges – including computer engineers, academics, and Nigel Sale, Tony's son – will meet to consider the nominees' written and recorded applications. A spokesman described the typical standard of entries as "substantial, significant, and all very good".

The awards ceremony will take place in London on 15 November, where the winner will be given £1,000 and a trophy, and will give a presentation to Computer Conservation Society members about their project and work.

Professor Martin Campbell-Kelly, computer historian and chairman of the judging panel, said: "When we first set up the award, we really weren't sure what to expect.

"We didn't fully appreciate the extent or breadth of computer conservation work that was going on across the world. As the previous entries and winners show, the subject is thriving, and imaginations are being fired.

"We look forward eagerly to this year's entries." ®

This hack owes it all to a dalliance with a TMS9900 40 years ago. How about you?