Hey American business, here's how to use blockch ... sorry – we've been shut down 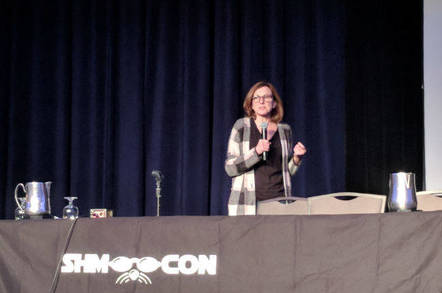 Shmoocon The political maneuvering that has shut much of the US government this month has delayed the National Institute of Standards and Technology's planned release of guidance about the risks and rewards of blockchain technology.

“We have ... a publication that’s coming out on Monday on the fundamentals of blockchain to help people understand what blockchain is and what it does for you,” Donna Dodson, the Institute's (NIST's) chief cybersecurity advisor told the ShmooCon security conference late last week.

The agency also has guidance on identity management on blockchain that was due to be published but that too is stalled while the US government figures out whether to fund itself.

Dodson, speaking hours before the shutdown kicked in, said that she was keen to publish better advice about the issues, but that her hands are tied until legislators sort things out.

Dodson also touched on the episode where the agency endorsed the Dual Elliptic Curve Deterministic Random Bit Generator, seemingly at the behest of the National Security Agency. She said that processes have been put in place to ensure such slip-ups do not happen again.

“We actually sat down and and spent a lot of time thinking about our principles for the development of our cryptographic documents and the big thing for me is trust but verify,” she told The Register.

“We laid out a process and we are very rigidly following that process with all that we are doing so we have that open and transparent process and share the questions that come up.”

So that’s all right then. ®

Now that the government is back on track (kind of) NIST has released its blockcahin consultation paper.