Don't panic... but our fragile world is drifting away from the Sun 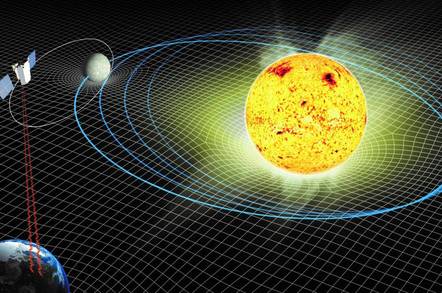 As the Sun ages and sheds mass, the gravitational pull it exerts on its planets weakens.

That means that the orbits of those home worlds slowly expand over time. Now, scientists have calculated this shift, and published the figures in Nature Communications on Thursday.

The Sun is continuously ditching material as its charged particles are whipped away and carried off in the solar wind. Also, its stores of hydrogen atoms fuse to form helium, and this process effectively radiates away mass as energy.

Since gravitational attraction is a function of mass, as the Sun sweats off those pounds, its grip on its planets loosens. If you’re picturing a dystopian future where the Earth breaks away and disappears into the cold obsidian abyss of space, then don’t panic. It’s not nearly as cinematic as that.

In fact, the drift is incredibly tiny. Antonio Genova, lead author of the study and an MIT researcher currently working at NASA's Goddard Space Flight Center, told The Register:

Earth's orbit expands by about 1.5 centimetres every year.

To put that in perspective, our planet is about 93 million miles from the Sun, or 1.496×1013cm. So we can spare ten or so millimetres a year.

These figures are rough estimates since the Sun’s rate of mass loss changes throughout its lifetime of 10 billion years. Assuming that the rate is almost fixed, Earth’s orbit will approximately shift by a total of 150,000 kilometres before the Sun expires – or around 0.1 per cent of its actual distance away from the Sun.

“But this effect increases with the distance from the Sun. Saturn, which is ten-times farther from the Sun than Earth, moves over 14cm per year,” Genova said.

The team used data taken from NASA’s MESSENGER probe, which measured the position of Mercury to calculate the solar mass loss rate. “Mercury is the perfect test object for these experiments because it is so sensitive to the gravitational effect and activity of the Sun," said Genova.

Erwan Mazarico, coauthor of the published paper and a geophysicist at NASA’s Goddard Space Flight Center, added: “We’re addressing long-standing and very important questions both in fundamental physics and solar science by using a planetary-science approach. By coming at these problems from a different perspective, we can gain more confidence in the numbers, and we can learn more about the interplay between the Sun and the planets.”