In Soviet California, pedestrian hits you! Bloke throws himself in front of self-driving car

We're not sure why but maybe it will become a thing 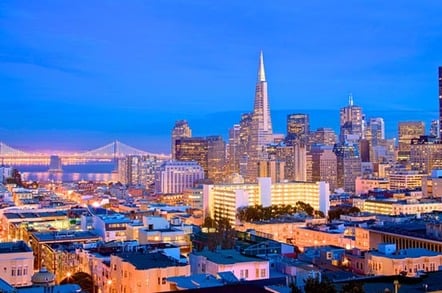 Anything could happen in the next half hour ... San Francisco at night

While commuter buses ferrying Apple and Google employees have been rerouted to avoid being shot at – reportedly with a pellet gun – GM Cruise has had less success keeping one of its self-driving cars out of harm's way.

Earlier this week, the autonomous vehicle subsidiary of automaker General Motors (GM) said that one of its Cruise autonomous vehicles (AV), operating in autonomous mode though presumably carrying a human minder, was struck by a charging pedestrian on January 2, 2018 in San Francisco, California, USA.

In journalism circles, this qualifies as a "man bites dog" story: it's seldom news when cars strike pedestrians because that happens so frequently, but it's not every day that a pedestrian runs into a car.

The collision occurred while the vehicle was waiting to make a right turn from the northbound lane of Valencia Street onto 16th Street as pedestrians crossed.

"A different pedestrian from the southwest corner of Valencia and 16th ran across Valencia Street, against the 'Do Not Walk' symbol, shouting, and struck the left side of the Cruise AV's rear bumper and hatch with his entire body," explains the report GM Cruise filed with California DMV, per regulatory requirements.

There were no injuries reported but the Cruise vehicle suffered some damage to its right tail light, according to the report.

No further detail is available because the police were not called. GM did not respond to a request for additional information.

Like the majority of the self-driving car incidents reported to California's DMV, human rather than technical error is to blame, though this appears to be a deliberate act.

It's tempting to see car storming as a manifestation of the same anti-tech animus that has prompted street protests in San Francisco against tech company commuter buses and, apparently, highway sniping.

But we have no evidence to that effect. Drugs or alcohol could just as well explain things. ®

With a zillion suppliers under the hood of most cars, this could get interesting