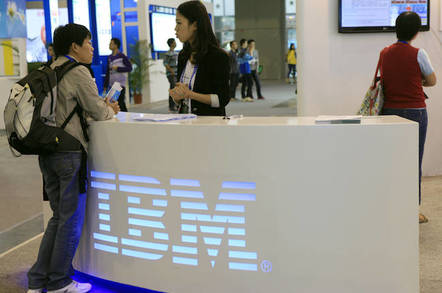 For 22 quarters in a row, IBM's sales have been shrinking. But not any more. In the final three months of 2017, Big Blue's revenues grew 3.5 per cent compared to year-ago quarter, the first such rise in about six years.

It's fair to say IBM sure took its time to regain its footing. And yet the corporation still managed to make a loss, due to a ten-figure tax bill from bringing home profits held overseas, apparently. Today IBM published its financial figures for its fourth quarter of 2017, ended December 31. Here's a summary:

For the full year:

"Our strategic imperatives revenue again grew at a double-digit rate and now represents 46 percent of our total revenue, and we are pleased with our overall revenue growth in the quarter," IBM CEO Ginni Rometty said of Big Blue's first positive growth since 2012.

"During 2017, we strengthened our position as the leading enterprise cloud provider and established IBM as the blockchain leader for business."

Despite the quarterly revenue growth, shares in IBM were down 3.2 per cent in after-hours trading at $163.70 due to concerns over its outlook for 2018 – software is seen as key to Big Blue's future success and yet these sales have a habit of coming and going.

Before the results were announced, and discussed on a conference call with executives, Daniel Chen at analyst house AllianceBernstein warned in a note to investors: "Software represents about 30 per cent of IBM's revenue and an estimated 50-plus per cent of pre-tax income, underscoring its importance to IBM's turnaround.

"IBM conceded that the pickup in its software revenues was on the mainframe platform, repeatedly stating that they had a very strong 'transactional' quarter. Our belief is that IBM benefited from software renewals and ELAs [enterprise licensing agreements], which we believe are unlikely to repeat [in the fourth] quarter."

And as it turned out, Watson AI and software sales – beyond operating system revenues – were pretty flat, cooling Wall St's confidence in the IT titan. ®