CEO thanks execs for service... more than most get 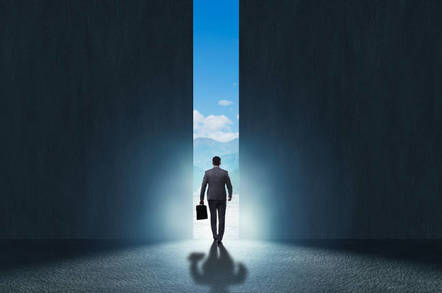 Exclusive DXC Technologies is splitting with exec veep and general manager Mike Nefkens - previously the boss for HPE Enterprise Services before the spin merger with CSC - amid a massive shake-down of the exec line-up.

The move was confirmed in a memo to the troops by CEO Mike Lawrie who said the business had been through a “great deal of change” since cost conscious DXC’s inception in April with “more to come”.

“As we round out our first year and look toward the future, we are doing some fine-tuning to our operating model… the changes we are making come from a thorough assessment of our experience and current state.”

Lawrie said the upheaval pertained to level two and three roles and said the regions and industries portion of DXC will now report to him directly to “improve agility and speed of decision-making.”

In the Build division, exec veep of operations and integration, Eric Harmon, is leaving next month and handing the controls to Edward Ho, who will head up the entire business unit. Art Wong, senior veep and GM of the security business is also set to leave at the end of Janaury, and his team will report to Chris Moyer, currently serving as CTO of the unit.

The workplace and mobility arm in Build is getting a new leader, Maria Pardee, who is currently the head of sales and acting GM. She will replace Howard Hughes.

In the Sell division, Nefkens, who ran the regions and industries sector has “decided to leave DXC to pursue his next opportunity. The organisation will be led by Larry Stack, who will report to Lawrie".

Elcio Barcelos, senior veep for HR will be leaving and her successor is Jo Mason. Matt Neisler, senior veep of finance and operations will become finance boss for the Americas, taking over from John Kavanaugh, who was today named as CFO of a new independent company being formed by the “combination of USPS, Vencore and KeyPoint”.

The Americas region is yet to name a general manager though one has been found, Lawrie confirmed. Nefkens had previously run this region in addition to his other responsibilities.

“After an extensive external search, we are pleased to have reached an agreement with a top-notch senior IT services business leader who has driven growth across multiple industry verticals in the region, and has been a successful CEO and entrepreneur as well. He will be joining DXC later this month as EVP and general manager for the Americas Region. We are respecting the notice period that he is currently serving and will announce his name and official start date in the coming days.”

Closer to Europe, Lawrie confirmed what Reg readers have known for some time that UK and Ireland boss Nick Wilson is leaving at the end of March, with senior veep and GM Maruf Majed marked as the replacement but a boss for EMEA yet to be named.

Koushik Redhakirishnan has been appointed as the head of the Asia region.

The final part of DXC - Deliver - is also undergoing a make-over with the business split into regional account delivery; offering delivery; core delivery; and delivery enablers. The unit will have four clusters including cloud, infrastructure and workplace; applications; transformation, transition and projects; and OCIO. Each area will have specific leaders.

“The changes I am announcing today will result in a number of people leaving DXC. I want to thank them personally for their efforts and their partnership in helping to establish our new company,” said Lawrie.

“All of the changes being announced today have a single goal: creating long-term growth and success for DXC and our people. We will more effectively engage our clients, partners and employees, and will better position the company to innovate, sell, deliver and grow.”

The bottom of the memo, of course, included a footnote that warned, “for those countries that require consultation with works councils or other employee representatives, this is not intended to provide complete country specific information and in no way reflects that final decisions have been made at a country level”.

DXC has so far failed to ignite the sales engine and insiders have questioned if Lawrie has the skills to move the business into growth mode. The proof will be in the eating. ®