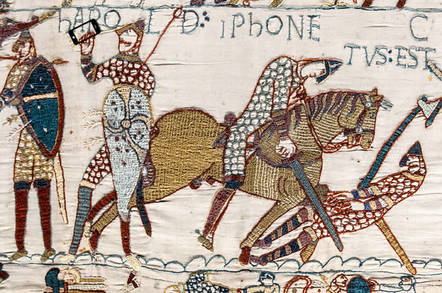 The French government will agree to lend the UK its most famous memento of the Norman conquest of England after Blighty leaves the EU.

President Emmanuel Macron is expected to announce the loan of the Bayeux Tapestry during his visit to the UK on Thursday, which would not be transferred before 2020.

According to The Times, the agreement was made after "months of talks between culture department officials in London and Paris" but it has not yet been decided where in the UK the tapestry will be displayed. It will be the first time it has left France in 950 years.

The Bayeux Tapestry depicts the conquest of the throne of England by William the Conqueror, from 1064 until the end of the Battle of Hastings in 1066.

It displays King Edward of England sending Harold to Normandy, who was supposed to confirm to William that he will be Edward's successor on the throne.

However, on the death of Edward on January 5, 1066, Harold seized the crown. In response, the tapestry shows William and his troops fighting Harold at Hastings and defeating his army on October 14.

There is some contention about where it was made – some historians claim it was sewn by nuns in Canterbury.

The artwork is inscribed on the UNESCO Memory of the World Register and is 70m (230ft) long and 50cm high.

Napoleon put the tapestry on display in Paris in 1804, while he was planning an invasion of England.

Less understood depictions contained in the tapestry include a number of naked characters along the border – not least the mysterious man with an erection. ®