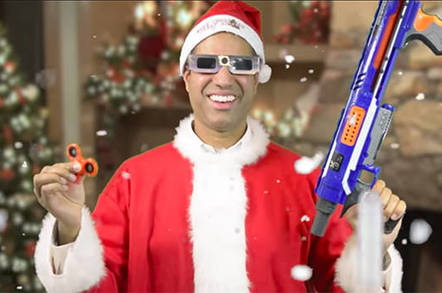 Wacky ... Just a reminder of FCC chairman Ajit Pai and his antics

Twenty-two US State Attorneys General filed a lawsuit on Tuesday to undo the Federal Communications Commission's rejection of net neutrality in America.

The FCC – the nation's broadband watchdog – late last year approved rules titled Restoring Internet Freedom that free ISPs to discriminate against data as they see fit. The federal agency did so despite broad political opposition and reports that millions of comments submitted to the FCC website to endorse the shift were fraudulent.

The FCC order was adopted by the regulator in December, and was popped online this month, but it is not yet official because it still has not been published in the US government's Federal Register.

The order reverses 2015 rules that classified broadband internet service providers as telecommunications services, which made them subject to specific regulations – such as more prioritizing certain network traffic, such as its own video-calling system over Apple's Facetime or Microsoft's Skype. The new order also returns mobile service providers to a separate regulatory classification.

The State Attorneys General contend the FCC's order is unlawful. They have asked [PDF] the US Court of Appeals in Washington DC to find the order "arbitrary, capricious, and an abuse of discretion" under the law.

California Attorney General Xavier Becerra argued that without the net neutrality protections as defined in the 2015 rules, ISPs may impose excess charges for faster internet service while limiting the ability of citizens to access certain content.

"Internet access is a utility – just like water and electricity," said Becerra in a statement. "And every consumer has a right to access online content without interference or manipulation by their internet service provider."

History has shown that service providers are willing to block services for their benefit, to the detriment of consumers. As documented by advocacy group Free Press, in 2005 Comcast blocked its customers from using peer-to-peer file-sharing services on its network. And from 2011 through 2013, AT&T, Sprint and Verizon blocked Google Wallet because they were collaborating on a payment service called Isis, before that name became a terror brand.

Separately, Mozilla, maker of Firefox and advocate for internet openness, filed its own complaint. The complaint filed by the browser maker and search box seller echoes that filed by the states.

In his announcement of the revised rules, FCC chairman Ajit Pai, a Trump appointee, argued that Americans don't care about being denied access to services or content. He says they want competition, which he somehow sees following from reduced regulation.

"The main complaint consumers have about the Internet is not and has never been that their Internet service provider is blocking access to content," he said. "It's that they don't have access at all or enough competition." ®