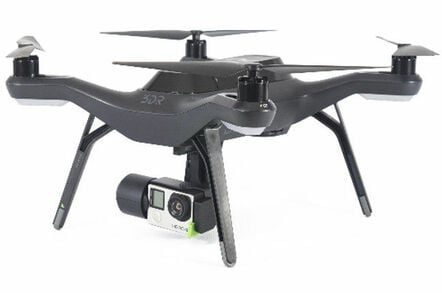 A 3DR Solo with a gimbal-mounted GoPro underneath. Crown copyright

A pilot flying a 3D Robotics Solo drone let his autonomous aircraft fly itself into a crane that some inconsiderate person erected on a building site.

The accident, which happened in England in June last year, was revealed in this month's Air Accidents Investigation Branch monthly update. The AAIB investigates aircraft incidents, accidents and crashes but its remit also covers unmanned aircraft.

During a flight to survey a building site in Kemsley Mill, Kent, the 1.8kg drone flew itself into the jib of a crane on site, shortly after takeoff. The pilot explained, in his report to the AAIB, that while the flight had been pre-planned with four waypoints, all at 400 feet above ground level – more than the height of the cranes – in the time between his site visit and the flight, another crane had been erected.

"From where the pilot was situated in the car park it was difficult for him or his observer to tell that it was about to strike the crane because of a lack of perspective," noted the AAIB summary report, which added that the drone crash caused "no damage" to the construction site.

The collision caused the gimbal carrying the drone's underslung GoPro camera to snap off, as well as cracking its fuselage and damaging a propeller and one of its four motors.

The drone had been programmed to take off and fly towards its first waypoint while climbing to 400ft.

In his written comments to the AAIB, the pilot, who had 26 hours of experience flying drones, said that in future he would program his autonomous aircraft to climb vertically to its required height before setting off on its mission.

Reporting aircraft incidents and crashes to the AAIB is a required part of all commercial aviators' operations in the UK. In addition, private pilots are strongly encouraged to report their own mishaps to the board, in the interests of sharing flight safety information which could help another flyer avoid making the same mistake. As the drone sector grows, one could reasonably expect more and more responsible operators to start reporting incidents to the AAIB.

So far the board has issued four reports on drone incidents; one in 2016 and three last year. The 2016 incident was the accidental dunking of a Schiebel Camcopter S-100 during the military exercise Unmanned Warrior, in which its pilot accidentally commanded his drone to backflip itself off the deck of Serco ship SD Northern River, which was supporting various military unmanned tech trials, into the icy waters of Benbecula, Scotland. ®