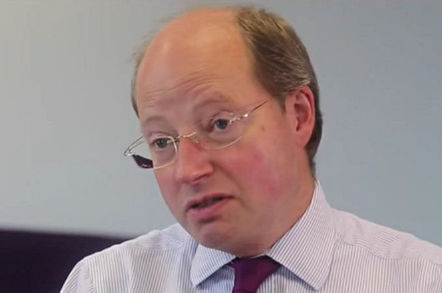 Comment Questions have been raised over the UK Home Office's most senior civil servant's involvement in the banning of GSM gateways – following botched redactions to freedom-of-information responses by Ofcom.

When Ofcom – Blighty's comms regulator – first banned GSM gateways in 2003 the man who is now the Permanent Secretary of the Home Office, Sir Philip Rutnam, was a partner at Ofcom, later rising to board level. Last year the gateways were briefly re-legalised by Ofcom before the Home Office swooped in to ban them again, citing the excuse of "national security".

GSM gateways are devices that were used to let people make cheap overseas phone calls, back when calls abroad cost tens of pennies per minute to make. Since the advent of VoIP and messenger apps, driving voice call costs right the way down, the business case for their use has disappeared. The devices are formally known as Commercial Multi-User Gateways, or COMUGs.

Sir Philip appears to have retained a close connection over the decades with the GSM gateway ban, even though he left Ofcom in 2009. At the time of the 2003 ban his remit at Ofcom covered spectrum use policy, which included GSM gateways. This link over many years to a very specific ban is unusual, particularly for someone who went on to spend several years at the Department for Transport, which of course has nothing to do with spectrum and phone regulation.

At the time of the second ban last year, Ofcom said it did not have the powers to prohibit GSM gateways on security grounds. The regulator told the Home Office that if it wanted to get its way and keep the ban, the government department would have to use its own powers to do so.

A redacted letter seemingly sent to Sir Philip about the GSM gateway ban, released by Ofcom (PDF) under Freedom of Information laws, says that the department "sought views on whether it would be appropriate" to lift the ban. An old friend of The Register, Matthew Dine of the Home Office Investigatory Powers Unit (who regular readers will recall was the civil servant who anonymously wrote to an Ofcom consultation urging the regulator to keep the ban*) contacted Ofcom asking whether a Home Office-imposed ban would cause even more harm to industry, other than destroying GSM gateway operators.

Dine's emails were helpfully revealed in an Ofcom document accessible via Google (PDF), in which the redacted text can be read by simply highlighting it, copying it and pasting it into a new document, as we have done.

Andrew Scurry and I discussed the next steps on Commercial Multi-user gateways with Helen Hearn yesterday. Helen suggested that, if we were considering issuing directions under the Communications Act 2003, that we consult Ofcom in order to try and avoid any directions from adversely affect (sic) other uses (Helen suggested the backhauling of communications by train operators).

I will need to get availability from the appropriate people in Home Office, and National Technical Assistance Centre (NTAC) but we would then like to discuss these issues with you to ensure that we understand any interests when considering the directions which we will put to the Home Secretary.

I would be grateful if you could indicate who might wish to be involved from your side and once I have spoken to NTAC will try to find a suitable date and time for us to get together.

Ofcom later wrote to Sir Philip on 15 July 2017 (PDF, page 15 of 16 – though his name is redacted the letter is addressed to the Permanent Secretary, the post he holds) revealing that while the Perm Sec had apparently raised concerns with Ofcom about the GSM gateway legalisation, his letter had arrived "shortly after the [public] statement setting out our decision was published".

The Home Office later stated, in a letter seen by El Reg, that Sir Philip had not had any influence over the decision to ban GSM gateways again last year.

If this is the case, it seems strange that the head of the Home Office was writing to Ofcom on this specific topic – presumably urging Ofcom not to legalise GSM gateways. While the issue is largely academic, it raises questions about reporting lines within government. His involvement is all the stranger because EU law explicitly states that GSM gateways are legal, and until next year's formal exit from the EU the UK is bound by those directives and regulations.

Why is the Perm Sec, the most senior civil servant in one of the most powerful government departments, taking such a close interest in an obscure policy issue that rightly should be handled by his junior officials and Ofcom? At a time when the UK is leaving the European Union and a thousand other matters are pressing for Sir Philip's attention, what makes such an obscure thing so worthy of his direct involvement that he felt the need to lobby Ofcom in person? ®

*Following our revelation of this, the Home Office resubmitted its response on headed paper and then angrily insisted it had never intended to make an anonymous submission. It also bombarded us with phone calls and emails demanding we delete Dine's name from the story, on the grounds that he is "too junior" to be named.

It is noteworthy that, at the time of writing, ours are the only news articles listed on Google that have mentioned the Home Office Investigatory Powers Unit. Neither the unit nor the department's National Security Directorate appear on the October 2017 Home Office organogram.