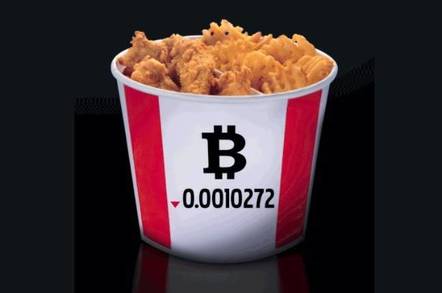 The artery-clogging Bitcoin Bucket “Includes 10 Original Recipe Tenders, Waffle Fries, Med Side, Med Gravy and 2 Dips,” at a cost of however many Bitcoin equates to CA$20.

KFC Canada’s page for the promotion helpfully includes live updates of that sum in Bitcoin.

The company said it’s sold out of the buckets, and that’s not in the slightest surprising given that Bitcoin is currently rather less convenient than many other currencies: transaction-processing times are currently over 100 minutes, while transaction fees can exceed US$50. The latter sum is more than the cost of the chicken, while waiting 100 minutes for a transaction to clear makes it faster and easier to either drive to KFC or to order just about any other food imaginable.

These are both known problems: games-mart Steam cited both as the reason it had dropped Bitcoin payments last year.

KFC therefore has very little reason to sell lots of the buckets. But every reason to gloat: the Facebook page announcing the deal has gone viral. Just like KFC does if undercooked. ®