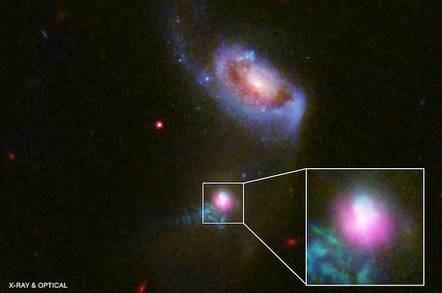 The black hole at the centre of galaxy SDSS J1354+1327 sucked in gases, “burped” – and then repeated the display.

As NASA explained in a statement: “The two-course meal for the black hole comes from a companion galaxy that collided with J1354 in the past. This collision produced a stream of stars and gas that links J1354 and the other galaxy. The separate outbursts from the black hole are caused by different clumps from this stream being consumed by the supermassive black hole. The researchers determined these two 'burps' happened about 100,000 years apart.”

Galaxy J1354 has been closely observed has been under study ever since NASA 's orbiting Chandra X-ray Observatory spotted a bright X-ray point emission there (some 800 million light years away). The Hubble space telescope, the Keck observatory at Hawaii and the Apache Point Observatory in New Mexico have all also peered at the far-off galaxy. Those optical observations provided the evidence of the double burp. As the Chandra team explained, the first was deduced from images showing the stripping of electrons from atoms “in a cone of gas extending some 30,000 light years south from the galaxy's centre”.

Evidence for the second event, caused when the black hole consumed a different clump of gas 100,000 years after the first, is to the north, where the researchers found “evidence for a shock wave, similar to a sonic boom, located about 3,000 light years from the black hole.”

In their paper (published in the Astrophysical Journal and available in a pre-press version at arXiv), the researchers say J1354 also offers “the best observational example of an active galactic nucleus turning off and then on” so far observed. ®

Stripped of its galaxy, this black hole is wandering naked in the cosmos