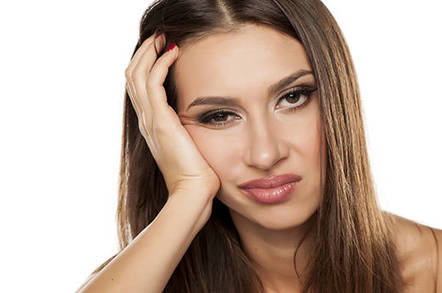 Comment This week, the tech world has been consumed with intrigue over the details of alleged "sex parties" hosted by Silicon Valley's power brokers.

But as more details have emerged, what we all knew to be true has been slowly reasserting itself: nerds don't do sex nor drugs nor rock and/or roll.

The salacious claims have been the main PR output from a new book being pushed by tech journalist Emily Chang called Brotopia.

Presumably because the details that Chang has elicited about tech-bro culture are unlikely to elicit a response greater than "yeah, that sounds about right," her team has focused on claims of wild, drug-fueled sex parties hosted by all-male millionaires and billionaires in luxury locations to which young, nubile tech ladies are invited and then subjected to unspeakable actions.

"Some of the most powerful men in Silicon Valley are regulars at exclusive, drug-fueled, sex-laced parties – gatherings they describe not as scandalous, or even secret, but as a bold, unconventional lifestyle choice," shudders Vanity Fair in an exclusive "adaptation" of the tech tome.

Much of the detail however appears to be pulled from a single party hosted by VC company Draper Fisher Jurvetson (DFJ) with a number of attendees recalling a far less debauched version of events.

The party was thrown as part of an annual conference that DFJ runs called Big Think, and the invite included no mention of drugs nor sex – something that the Vanity Fair article hilariously flags up as evidence of just how Bacchanalian these Silicon Valley folk are: they don't even mention sex or drugs because they are doing so much of it, it's just freaking normal to these people!

Except no one seems to recall any drugs. Or sex, either. Which, for this corner of California, is notable in itself. This is, after all, the birthplace of the Summer of Love. Drugs and sex are as much as part of Northern Cali culture as hiking and weird health kicks.

One of the most salacious details covers a "cuddle puddle" where a small area of floor was covered in pillows, the lighting was dimmed, and people laid down and… cuddled. It even extended to heavy petting. Which is so outrageous it is banned at public swimming baths.

And, really getting their freak on, some people dressed up in costumes! One man was dressed up as a… bunny. A full bunny suit, it seems, not a sexy bunny costume that you'd expect to see at the Playboy Mansion.

Worse was to come: people allegedly took drugs. But no ordinary drugs. They allegedly took an "enhanced" version of ecstasy's main chemical component, MDMA, that was called – get this – Tesla. It was called that because, apparently, it was super fast acting. And none other than Elon Musk was present at this filthy sex party! It's true – he's admitted himself! But left before anything happened.

If you're feeling underwhelmed at this point, you're not that only one. So far it sounds like a not-very-good house party from university days. A pile of pillows, some crap costumes, and someone pretending they have some super drug. Hardly the Marquis de Sade.

Even the Mighty Musk poured cold water on the over-heated claims. "That DFJ party was boring and corporate, with zero sex or nudity anywhere," King Elon told WiReD magazine. "Nerds on a couch are not a 'cuddle puddle.' I was hounded all night by DFJ-funded entrepreneurs, so went to sleep around 1am. Nothing remotely worth writing about happened. The most fun thing was Steve lighting a model rocket around midnight."

Another attendee was angel investor Jason Calacanis. He was also underwhelmed: "My wife and I attended the party, along with around 200 people from industry, but we didn't witness anything."

Another attendee: "I saw no sex, I saw no drugs. It was a fun party with lots of great people, but it wasn't a sex party." Numerous others have tweeted that they were at the party and saw nothing. Some even said they stayed until 5am but took no drugs and had no sex.

Sorry to be blunt, but: why the hell are you still at a party at 5am if there's no drugs or sex? What are you doing? Playing video games?

California has, for more than 50 years, been the epicenter of the drug and sex industries in the United States. We bet most of the world's pornography is filmed in San Fernando Valley just north of Los Angeles.

A good proportion of the country's marijuana in grown in the fields north of San Francisco. Just over the bay from SF for many years existed the world's largest factory for LSD. Swinging culture was born in California, and is even protected in the law courts.

In fact the only reason that Chang even bothers to mention the dull party seems to be in an effort to paint venture capitalists as some kind of drug-crazed billionaire bonkers.

The smoking gun in Chang's story is a woman who was invited to a party and sat down on the floor with two couples. She was offered a white powder – which she took. One of the men asked her if he could kiss her. She asked him if that was ok with his wife. He said it was. And then she said it was. So she kissed him. But then she regretted it.

"I felt gross because I had participated in making out with him and then he kept trying to find me and I kept trying to run away and hide," Jane Doe told Chang. "I remember saying to him, 'Aren’t people going to wonder?' And he said, 'The people that know me know what is going on, and the people that don’t, I don’t really care.'"

But she did care. So she left.

And so ends the dullest sex-and-drugs story that anyone has ever told in the history of mankind. That this story even ended up in a book, let alone had an entire magazine article dedicated to it, is almost beyond comprehension.

If anything, this whole sorry saga proves the exact opposite of its intent: that if you're looking for a good time, give Silicon Valley a wide berth. ®