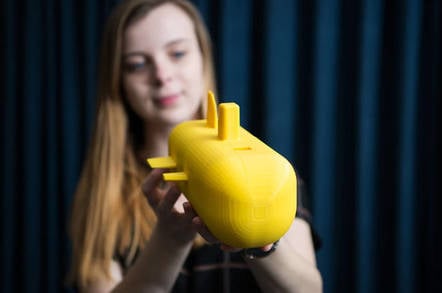 Apprentice Verity Jackson with the new boat, now thought to be in frontline service at a classified indoor location in Suffolk (Pic: DSTL)

The British government has put a seven-year-old boy's design for a submarine into production, saying the lad had "really thought about" his work.

Apprentices from the Defence Science and Technology Lab (DSTL) took a submarine sketch sent to the government-owned lab by seven-year-old Jacob Bland, from Suffolk, which he said they could use for "sneaking and spying".

Verity Jackson, one of the apprentices, said in a DSTL statement: "It was really great to be able to reproduce this for Jacob. It was a bit tricky and took quite a bit of work to get the model ready to print, but we are all thrilled with the outcome and equally thrilled we were able to bring Jacob's drawing to life. On the plus side, the mini project will help towards my qualification."

Jacob's dad, Matthew Bland, added: "We are overwhelmed by the thought and effort put in by staff at DSTL. Jake was absolutely made up about the submarine, and it hasn't left his side yet."

DSTL is a British government defence research establishment. As its name implies, it focuses on harnessing scientific and technical innovations for the defence of the realm.

Its remit stretches from figuring out how many aircraft can be usefully kept on the flight deck of Britain's two new aircraft carriers (a process known as "spotting" jets and helicopters) to overseeing the Dragonfire giant laser zapper – though they still haven't placed any contracts for organic undersea weaponisation of this innovative new military tech.

Slingshots? Hawks? Anything that will stop airports grounding planes during holibobs, really