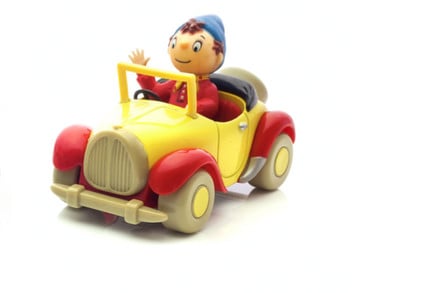 Interview Dive beneath the hype and the dry ice of CES, and it becomes apparent. The connected cars and electric cars being shown off in Las Vegas this week are not self-driving cars; and it has proved a lot harder to make an autonomous car than to sell the idea to an AI-obsessed think tank.

Of the many obvious-in-retrospect reasons for self-driving cars to fail, one has not seemed obvious. Christian Wolmar, the author and broadcaster, calls it the Holborn Problem. And it goes like this.

If self-driving cars are to be considered at all safe, then they will be programmed to come to a halt as pedestrians enter the road space. In many places, however, such as London's Holborn Underground station at rush hour, pedestrians are typically spilling over into the road en masse.

The self-driving cars would sit there for hours. To solve this, we can either lower the safety standards, or else introduce draconian pedestrian restrictions. The open spaces that cities like to encourage would end as the barricades go up. And foot movement would need to be enforced with Singapore-style authoritarianism.

He’s written a short book, a monograph, that’s a blast to the autonomous vehicle hype.

Wolmar thinks the self-driving car is a ludicrous tech nerd fantasy, one that’s only been indulged by clickbait-chasing journalists who recycle the press releases and don’t ask tough questions. Or hardly any questions at all.

Wolmar told us: “This is a fantasy that has not been thought through, and is being promoted by technology and auto manufacturers because tech companies have vast amounts of footloose capital they don’t know what to do with, and auto manufacturers are terrified they’re not on board with the new big thing,” he said. “So billions are being spent developing technology that nobody has asked for, that will not be practical, and that will have many damaging effects.”

It has turned out that autonomous cars are full of unexpected consequences, he says.

“I started looking at what was being written and began finding that it all rests on sand. There are no foundations to this notion that these pods are going to replace the car parked on our driveways. There’s no path to which we might get there. It’s not a steady development - 99.95 per cent of cars are still being driven. The autonomous cars will have to deal with breakdowns, jaywalkers, roadworks and lines of parked cars, broken traffic lights and so on. It just beggars belief that any sensible journalist would fall for it.”

Safety is the biggest practical obstacle, Wolmar explains in the book. Tech companies’ accident per mile figures are not realistic even in the ideal weather conditions they choose for their runs, he points out. And even then, it turns out drivers “intervene” far more often than the companies let on. With Uber’s US tests it was about every 0.8 miles (1.3km).

In practical terms, de-skilling has proved another obstacle. A less than fully autonomous car needs the driver to be alert, but in reality their attention wanders, so they’re unable to react, or react well, when called upon - usually for an emergency.

In the case of Joshua Brown, the first fatality in a Tesla, a crash investigation found the driver had ignored seven warnings, and hadn’t touched controls for over half an hour, Wolmar points out in the book.

“Google discovered that Level 3 was counterproductive - drivers fell asleep on the highways and couldn’t intervene. Level 3 automation has been ruled out by both Google and Ford as worse than useless - you have to be alert the whole time but the car has deskilled you. So they’ve leaped to Level 4 and Level 5. Then they start to talk up the benefits of social change instead!”

Even assuming the manufacturers magically surmount the technical and legal obstacles, and can leap straight to full automation, the pods would still be hugely unappealing, Wolmar argues.

“It doesn’t work for the guy who lives 2 miles [3km] outside Woking and has his golf clubs in the Range Rover, and the car seats for kids in the back to take them to after-school clubs, and where he keeps the soccer stuff in the car - none of this works for a pod,” he explains. “I can phone Uber at any point and my kids do sometimes, and get a lift. It doesn’t mean you can replace all cars with these pods.”

“I don’t see how if semi-autonomous trucks all need a driver, you’re saving much money.”

Or as he explained in a New Statesman piece, “People like owning their personal vehicle because it is always available and can be customised to ensure that the child seat is properly in place and the radio tuned to Magic.”

But even where you think failure might still have useful consequences, such as semi-autonomous driving, there are unforeseen consequences, he writes. For instance, wouldn’t convoys of cargo in the slow lane be useful?

Apparently not. Build them big, Wolmar explains, and they obscure the road signs for other drivers. (Three trucks are almost the length of a football field). And there have been big problems with sychronising them.

“There [are] a lot of issues to convoys - they have different acceleration capabilities. In Scandinavia it has been difficult to coral them altogether communally. Gaps would appear that other drivers would then try and enter,” he explained. “I don’t see the great advantage of these road trains above ordinary trains.”

Does Wolmar see any good coming out of self-driving tech?

“I see a future for driver aids - but they’re distinct from autonomous cars. But there’s also a risk with these too that they start to de-skill drivers. If we wanted to improve safety, we would do all sorts of things like limiting cars to 70mph [112kph] permanently, more 20mph [32kph] zones, and so on.”

I pointed out that the “autonomous” cars can miss out crucial parts of the drive. I only know of one demonstration (Volvo) where the cars can be successfully parked.

“The promises have already been broken,” Wolmar noted. “Since I wrote the book, Volvo has kicked its programme four years ahead.” 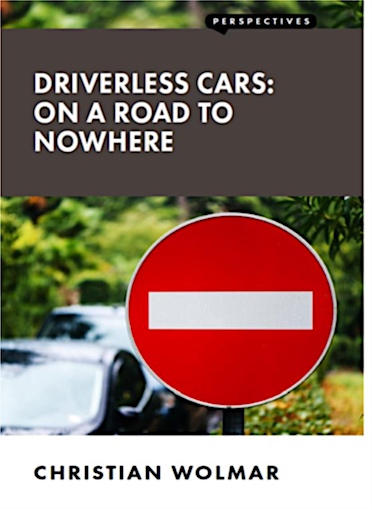 Wolmar speaks of seeing a recent government-sponsored competition for CAVs [connected and autonomous vehicles] with a £50,000 prize.

“Why the obsession with something so marginal?” he asks aloud.

One answer, I suggested, might be sociological. We’ve seen an explosion of thinkfluencers, a zeitgeist-chasing, quango hopping consultariat. The Innovation Gravy Train. With AI, journalists want to talk to think tanks, [they] want to talk about a robo-apocalypse taking our jobs, rather than why deep learning is in trouble. I bet you didn’t know that the UK has developed a “brand” for the development of CAVs. The brand is called “MERIDIAN”.

Driverless Cars: On a Road to Nowhere will be published by the London Publishing Partnership on January 18. The series editor is Diane Coyle. More details here.