But a big question remains: how fast will it actually be? 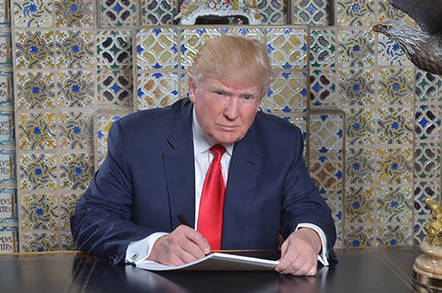 Analysis President Donald Trump has signed two executive orders aimed at pushing broadband internet into more remote parts of the US, capping a multi-year effort to get America online.

But the effectiveness of those actions and the speed and quality of the internet access that will result is in doubt.

The first executive order is aimed at "streamlining and expediting requests to locate broadband facilities," and will force federal agencies to use standard forms and contracts for antennas installed on federal buildings. And the second, directed at the department of the interior, will oblige the department to make it easier for companies to install antennas and require it to report back on progress.

Both executive orders result from a report [PDF] by a task force that was asked to look at how to help out the agriculture industry and rural areas more generally. That report made a range of recommendations, many of which will take a long time to come to fruition and will require complex multi-agency and economic efforts.

And so the White House, the task force, and those pushing the case for rural America have focused on broadband internet as the "low hanging fruit" that can be used to highlight efforts and improvements.

There are already a number of multi-billion-dollar efforts by the federal government to expand internet access to rural areas, and the Department of Commerce's telecoms wing – the NTIA – as well as the Federal Communications Commission (FCC) have been working on the issue for some time.

However, several big problems remain, not least of which is the actual speed that rural areas can expect to receive.

The presidential orders unfortunately demonstrate the limited influence that the White House – and federal government – has when it comes to internet access. The orders amount to little more than cutting bureaucratic red tape. It's an improvement, but it won't result in a big jump in broadband provision.

For that, the US government is reliant on Big Cable to roll out new networks, dig trenches, lay pipe, run cables, put up wireless masts, and so on. And Big Cable is only willing to do that on its terms: with one company gaining effective control of specific areas, with its construction bills covered, and with much slower speeds than a leading Western nation should expect in 2018.

In fact, the FCC is paying Big Cable billions of dollars to roll out pipes in rural areas. Later this month, the regulator will approve phase two of its Connect America Fund and award $2bn to companies that "commit to offer voice and broadband services to fixed locations in unserved high-cost areas."

The award would be done through reverse auction, meaning that interested companies will seek to underbid one another in a series of auction rounds to get the rights to specific areas.

The FCC has already awarded $255m to five companies to bring 500,000 rural connections online – but it made that award years ago when the FCC defined "broadband" as just 4Mbps down and 1Mbps up, meaning the deployed connectivity was pretty slow.

Then in 2014, the FCC updated the definition to more reflect the modern world, and made 25Mbps down and 3Mbps up as the new standard for "broadband."

Big Cable hated that additional speed requirement, and has been fighting tooth and nail to get it reduced, not least because if the industry fails to make adequate progress with broadband rollout overall then the FCC is legally allowed to intervene and force cable companies to act, cutting into their profits.

Since cable-industry-friendly chairman of the FCC, Ajit Pai, took over, he has repeatedly tried to lower the definition of broadband speeds, down from 25Mbps, taking advice from cable companies on how to do so without having to explicitly say so.

The FCC has also proposed that the definition be made more "flexible" and defined according to the speeds that most people subscribe to – a bizarre approach that would actively incentivize internet providers to provide slower speeds. People were not happy about the attempted fudge.

Another fudge coming down the line is the cable-industry-stacked Broadband Deployment Advisory Committee (BDAC), convened by the FCC, which is expected to push recommendations for scrapping rules around new mobile antenna installations.

The introduction of 5G technology requires lots of additional antenna but the permitting process makes that time-consuming and expensive. The BDAC has actively excluded local and state official voices and introduced a majority of cable industry representatives.

Trump's executive orders are also focused specifically on the introduction of antennas – and therefore mobile networks – and the task force report on which the orders are predicated also stresses mobile networks, 5G, and the internet-of-things ahead of fixed-line broadband.

The sad truth is that this focus on mobile is because of the lower definition of broadband speeds for mobile networks. Cable companies don't want to have to deal with the additional expense of rolling out truly fast internet speeds.

And the federal government wants to show big increases in broadband take-up and so is willing to enter a Faustian bargain with Big Cable in order to get those figures, despite the fact that introducing slower internet networks will inevitably exacerbate the digital divide between high-population urban and low-population rural areas over time as speeds rise in the cities.

Pragmatically, of course, any internet is better than no internet. But the desire to be seen to be doing something is unfortunately undermining the true vision of a fast, globally connected United States. And the reason is cable company profits. ®