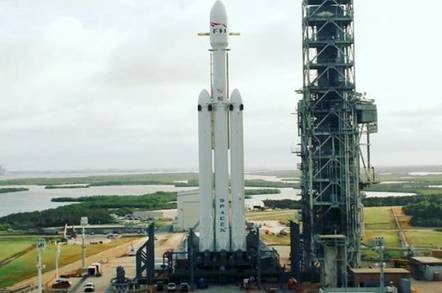 Amid that depressingly uneventful blastoff, a visitor to the launch site spotted evidence of a Falcon Heavy being set up for test firing, signaling the hardware may finally be ready to take to the skies.

The rocket, which is expected be around twice as powerful as any of today's commercial launch vehicles, was raised to a vertical position on launchpad 39A at the Kennedy Space Center on Cape Canaveral last month. After engineering checks, it was lowered again. Today, it was seen in a horizontal position suitable for static firing tests.

This is ahead of the Heavy's maiden launch that's scheduled for the end of the month.

Testing all 27 rocket motors is going to take some time. Even if it fires flawlessly during experiments, serious doubts will remain over the viability of a Falcon Heavy launch. Last year, SpaceX supremo Elon Musk said there was a "real good chance it's not going to make it into orbit."

The Falcon Heavy is essentially three SpaceX Falcon-9 rockets strapped together with a small booster on top. While the rockets themselves are reliable, the airframe of this combined booster has had to be designed and engineered to handle the mechanical stresses involved and the payload weight.

If all goes to plan, the Falcon Heavy will, during launch, fire all three rockets simultaneously, generating 22,819 kilonewtons (5.13 million pounds-force) of thrust from all 27 motors. This will boost the first payload – Elon Musk's personal cherry-red Tesla Roadster, no kidding – up into orbit, and on a nominal course to Mars.

The two side rockets will peel off before this, and land back at the spaceport for reuse. The central rocket will carry on firing, and then return for landing on the Atlantic-based SpaceX drone barge, dubbed "Of course I still love you."

Here's a simulation of the Falcon Heavy launch:

And if the Falcon Heavy blows up on the pad, the damage would be immense, and it could set back the program for years.

To say the Falcon Heavy is slightly delayed is like saying Intel's chip bug problems are a slight concern. The Heavy was slated to fly in 2013. However, SpaceX shares a similar attitude to deadlines as Douglas Adams once did, and the date kept on slipping.

This isn't necessarily a bad thing – after all, you're looking for reliability over development punctuality to keep launch costs low and reassure potential customers. It's also important from an insurance perspective, for actuaries figuring out the potential for loss of cargo.

Even if it is a successful launch and landing for the Heavy, don’t expect to see the new rocket matching the ordinary Falcon delivery system's launch cadence. The Heavy can carry 63,800kg (140,660lb) into low-earth orbit or 26,700kg (58,860 lb) further out into geostationary orbit. There aren't a lot of commercial cargos that will require the Falcon Heavy. The bog-standard Falcon is enough, and the Heavy would be overkill, in other words.

The James Webb Space Telescope is one such payload the Heavy would be suited for. However, NASA opted for the tried-and-tested Ariane rocket for that launch, which is due to take place next year.

Nevertheless, the Falcon Heavy is key to Musk's interplanetary schemes, and will be competing with NASA's own Space Launch System for deliveries to Mars. The SLS is still years away from flight, and is billions of dollars in the hole. If Musk can demonstrate that the Heavy can do a similar job much more cheaply, he may well bag some big US government contracts. ®