Who's that at Ring's door? Why, it's Skybell with a begging cup, er, patent rip-off lawsuit

Smart home gizmo maker could do with a few extra bucks 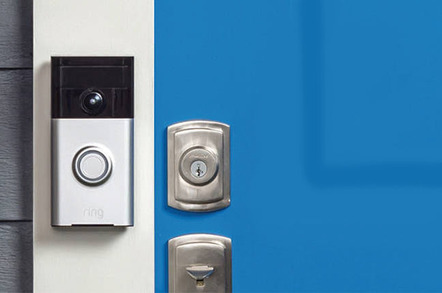 Smart home doorbell maker Ring has had a bad start to the year with the delivery of a patent infringement lawsuit courtesy of competitor Skybell.

Skybell filed its case [PDF] on Friday in a southern California district court, just days before Ring launched a range of new indoor and outdoor security cameras and a line of outdoor "smart lights."

The lawsuit claimed Ring has infringed three of Skybell's patents, all of which are critical to a smart doorbell: US patent 9,055,202 covering motion detection at a door; 9,179,109 covering streaming video at a door to a phone or tablet; and 9,179,107, covering sounding a doorbell chime on a phone or tablet.

They are just three of 71 patents that Skybell has on its product, and the biz portrays its intellectual property strategy as evidence of its legitimacy, while at the same time mocking and goading Ring for only having three patents.

"This lawsuit is the tale of two companies in the emerging video doorbell market," the complaint reads. "The plaintiff SkyBell is the technological and intellectual market leader… and that innovation pays off for consumers in SkyBell’s products: SkyBell routinely beats its industry competitors in head-to-head product reviews."

It goes on: "Ring, by contrast, has taken a different approach. Ring has devoted its attention and resources to advertising and marketing, which no doubt has contributed to its familiarity among consumers. But Ring has not had nearly the same success with research and development. Ring has only three issued patents to its name, and its consistent approach to video doorbell technology is to copy from Skybell."

There's clearly no love lost between the two upstarts, and the bitchiness continues through the lawsuit.

"Ring has every right to attempt to compete with Skybell via hype rather than innovation," Skybell mocked. "What Ring may not do, however, is compete by theft."

In between bigging-up its own products, the Skybell lawsuit takes potshots at Ring, noting that it appeared on the TV program Shark Tank back in 2013 – and was unsuccessful.

The company "failed to secure any funding," Skybell snorted, adding Ring managed to "leverage the ensuing publicity into additional sales." As for the actual – growing line – of Ring products, Skybell flipped its hair, and scoffed: "After its Shark Tank appearance, Ring has continued to pursue the same strategy: attract sales by advertising and marketing, without necessarily providing any technical innovation."

What is less clear is why Skybell has chosen now to launch the lawsuit. By its own admission, the company did not hit up Ring until many months after the patents were granted in November 2015. Skybell argued, somewhat oddly, that Ring must have been aware of them because at the bottom of an email sent from Skybell CEO Joseph Scalisi to Ring CEO Jamie Siminoff in May 2016 there was a link to a webpage that contained information on its patents.

"On June 1, 2016, Mr Siminoff answered that email and specifically addressed Mr Scalisi’s patent portfolio link in his response," the lawsuit noted. It seems that response led to a meeting between the two competitors a month or so later in which "executives at SkyBell met with Mr Siminoff and discussed who held key patent rights to video doorbells."

It is, of course, very common business strategy in the United States, particularly in the technology sector, to get hold of patents and then use them to either drag royalty payments out of competitors, or to act as counterweight to your competitors' patents: the idea being that you create a kind of Mexican standoff over patents (something that everyone wishes Samsung and Apple had stuck to.)

Skybell's lawyers gleefully noted that one of Ring's US patents (9,819,713) references Skybell's patents as prior art. Calling that patent "clearly invalid," it argued that "Ring had further notice of SkyBell's patents as a result of Ring’s own patent practice."

Of course what the lawsuit does not mention is two pretty critical factors in the smart home market as it relates to Skybell and Ring.

First, Ring has much, much more money that Skybell having pulled in more than $200m in funding – $100m of which was secured this time last year. That has led to Ring aggressively expanding its product range to include security cameras and a home security system. Skybell, by comparison, has raised under $1m in funding and only has a smart doorbell.

This week, at the annual Consumer Electronics Show, Ring is displaying new indoor and outdoor cameras and a new line of "ring beams" that has resulted from its acquisition of LED company Mr Beams. Those lights – which include pathway lights, step lights and spotlights – will work with the other Ring products, and with its new security system that goes on sale in the US in March.

But secondly, and even more importantly, Google-owned smart home behemoth Nest is also moving into the market, having put out a new security system late last year and with plans to release a – you've guessed it – smart doorbell in the next month or so.

As such, you could be forgiven for imagining that the smart thing for an organization like Skybell – which holds a large number of patents but has limited market share and is vastly out-resourced by two competitors – to do would be to use what leverage it has – in this case, intellectual property – to either get a cut of others' profits, or get bought out.

A lawsuit may be a smart way of advertising the situation.

As for Ring, a spokesperson gave us the age-old line that the company "does not comment on ongoing legal matters." ®