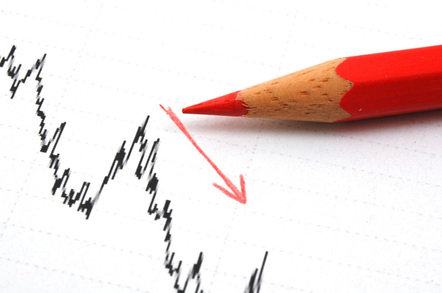 The infrastructure software slinger reported revenue of $1.234bn, up 80.3 per cent year-on-year, flattered by two months' worth of sales ($569.8m) contributed by the HPE Software division it merged with on September 1 for a whopping $8.8bn.

Organic revenue generated by the Micro Focus and SUSE Product portfolios actually dipped 2.9 per cent to $664.7m. This was the element below analysts' consensus forecasts.

The Micro Focus-only product side of the business declined 7 per cent to $500m, "primarily due to weakness in the Host Connectivity portfolio, particularly in North America, where there has been a continued impact of the loss of a sales team in this area," said CEO Chris Hsu in a statement.

The exec said he delayed "operations improvements" in the unit in anticipation of the completion of the HPE Software buy as it made more sense to do them when both businesses were combined.

The SUSE Linux division grew 13.3 per cent to $164m, despite "challenges" with "sales execution issues", again Stateside. The local sales leadership were swapped out as a result and better things are expected, the firm said.

The HPE and Micro Focus lines came together on November 1 and were split into five sub-categories: security, IT operations management, application delivery management, information management and governance, and application modernisation and connectivity.

The business has made numerous buys over the year, including Borland, Attachmate, NetIQ, Novell and Serena Software, in addition to HPE Software. It buys companies, cuts costs and then tries to farm the existing user base to sell them licence renewals.

Further deals can be expected after Micro Focus moved CFO Mike Phillips into a "new and important role" as director of M&A. Chris Kennedy, former CFO at easyJet and ARM, has taken on the position at Micro Focus.

The share price was down by 17 per cent at the time of writing. ®