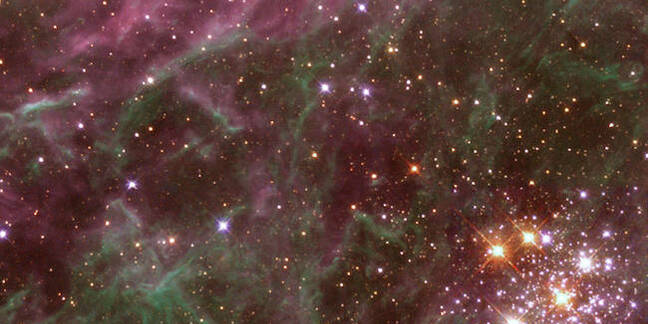 A freak nebula is teeming with gigantic stars, say scientists who now reckon these cosmic heavyweights may not be so rare after all.

Fabian Schneider, a fellow at the University of Oxford, England, who led the research published in Science today, told The Register: “30 Dor contains about a third more massive stars – beyond 30 solar masses – than any other region we could look into at the moment. Also, it contains some of the most massive stars ever observed, so this really is a region of extremes and record-holding objects."

Why 30 Dor is so rich with enormous stars is still unknown. It is an oddity because massive stars are rare. Their giant sizes mean they burn through hydrogen reserves at a fast rate, and have short lifespans in the order of a few million years. Ordinary stars, such as our Sun, can last about 10 billion years.

When a nebula's stellar population forms, typically fewer than one per cent of all the stars will be more massive than 10 solar masses. And as the nebula ages, these giants will die out before their smaller cousins. At some point in the future, there will be no behemoths left, only lower mass stars like our Sun.

It’s uncertain how common rich cosmic clouds like 30 Dor are. Schneider believes more exist than previously thought. It makes you wonder how many other exotic objects in the universe have been overlooked, written off as too rare to search for.

“The absolute numbers above might not sound too much, but this translates into a 70 per cent increase in the number of supernovae from such massive star populations like in 30 Dor," Schneider said. "And also the formation rate of exotic objects like black holes increases by 180 per cent. The latter is especially interesting in light of gravitational wave detections from merging black holes made in the last years with Advanced LIGO/VIRGO."

“30 Dor has always been considered a stepping stone to the distant universe,” Schneider told us. "The distant universe cannot be observed in such great detail and 30 Dor, therefore, bridges this gap. We hope to transfer our knowledge that we gained from this local region to the distant, early universe to help understand what shaped our cosmos." ®

'Orphan memory' could unlock more secrets hidden in our universe

Special Breakthrough Prize for all scientists and engineers working on LIGO