Nice try, but no, you're gonna have to cough up for these expensive data center chips 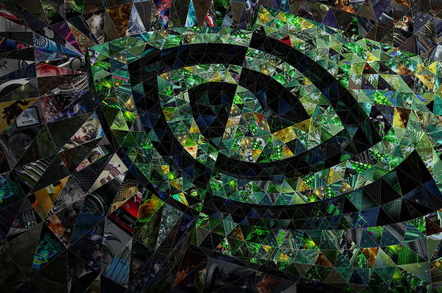 Nvidia has banned the use of its GeForce and Titan gaming graphics cards in data centers – forcing organizations to fork out for more expensive gear, like its latest Tesla V100 chips.

The chip-design giant updated its GeForce and Titan software licensing in the past few days, adding a new clause that reads: “No Datacenter Deployment. The SOFTWARE is not licensed for datacenter deployment, except that blockchain processing in a datacenter is permitted.”

In other words, if you wanted to bung a bunch of GeForce GPUs into a server box and use them to accelerate math-heavy software – such as machine learning, simulations and analytics – then, well, you can't without breaking your licensing agreement with Nvidia. Unless you're doing trendy blockchain stuff.

A copy of the license in the Google cache, dated December 31, 2017, shows no mention of the data center ban. Open the page today, and, oh look, data center use is verboten.

To be precise, the controversial end-user license agreement (EULA) terms cover the drivers for Nvidia's GeForce GTX and Titan graphics cards. However, without Nvidia's proprietary drivers, you can't unlock the full potential of the hardware, so Nv has you over a barrel.

It's not just a blow for people building their own servers and data centers, it's a blow for any computer manufacturer – such as HPE or Dell – that hoped to flog GPU-accelerated servers, using GTX or Titan hardware, much cheaper than Nvidia charges for, say, its expensive DGX family of GPU-accelerated servers. A DGX-1 with Tesla V100 chips costs about $150,000 from Nvidia. A GeForce or Titan-powered box would cost much less albeit with much less processing power.

In terms of 64-bit double-precision floating-point math calculations, the V100 utterly smokes the 1080 Ti: about 7 TFLOPS from the V100 to 0.355 TFLOPS from its GeForce cousin. The V100 similarly smashes the video gaming part on 32-bit single and 16-bit half-precision floating-point math. The top-end GeForce Titan Xp is similarly dominated by the V100.

However, one senior techie who supports an academic medical research facility and alerted us to the licensing change, said boffins don't necessarily need Tesla powerhouses, and that gamer-grade graphics processors can be good enough, depending on the kind of work being performed and the budget available.

“This could potentially have a huge impact in research institutes that use the lower-cost GPUs to process data," they told us.

"Much of this data does not actually need to double-point precision of the Tesla cards. This is a shocking sneaky way to suddenly introduce limitations to their product. Most places would be happy to acknowledge that using a consumer product in a server may invalidate the warranty, but to limit in such a way that it would leave researchers open to possible legal threats is frankly disgusting."

A spokesperson for Nvidia told The Register that the licensing tweak was to stop the “misuse” of GeForce and Titan chips in “demanding, large-scale enterprise environments.” In other words, Nv doesn't think gaming cards are a good fit for hot, crowded, demanded and well-funded server warehouses. The spokesperson said:

GeForce and TITAN GPUs were never designed for data center deployments with the complex hardware, software, and thermal requirements for 24x7 operation, where there are often multi-stack racks. To clarify this, we recently added a provision to our GeForce-specific EULA to discourage potential misuse of our GeForce and TITAN products in demanding, large-scale enterprise environments.

NVIDIA addresses these unique mechanical, physical, management, functional, reliability, and availability needs of servers with our Tesla products, which include a three-year warranty covering data center workloads, NVIDIA enterprise support, guaranteed continuity of supply and extended SKU life expectancy for data center components. This has been communicated to the market since the Tesla products were first released.

Will Nvidia sic its legal dogs on those who break the license by installing gaming-grade graphics processors in data centers? Nvidia claimed it does not plan to ban non-commercial uses and research.

“We recognize that researchers often adapt GeForce and TITAN products for non-commercial uses or their other research uses that do not operate at data center scale. NVIDIA does not intend to prohibit such uses,” a spokesperson for the California chip architects said.

We asked Nvidia to clarify what it defined as a data center, and the spokesperson admitted that “there are many different types of data centers.”

“In contrast to PCs and small-scale LANs used for company and academic research projects, data centers typically are larger-scale deployments, often in multi-server racks, that provide access to always-on GPUs to many users,” the rep added.

At the moment, it sounds as though rule-breakers will get a stern talking to if Nvidia discovers them flouting its license, and be asked to get out their checkbooks – or else.

"Whenever an actual or proposed use of our drivers that is contrary to the EULA is brought to our attention, NVIDIA takes steps to work with the user to understand the reasons for each unlicensed use, and works to evaluate how we can best meet the user’s needs without compromising our standards for hardware and software performance and reliability," the spokesperson said.

"Whenever any user would like to use a GeForce or TITAN driver in a manner that may be unlicensed, they should contact NVIDIA enterprise sales to discuss the use and potential options. We expect that, working together with our user base on a case-by-case basis, we will be able to resolve any customer concerns." ®