Hyperledger 3 years later: That's the sound of the devs... working on the chain ga-a-ang

But is anyone actually using it? 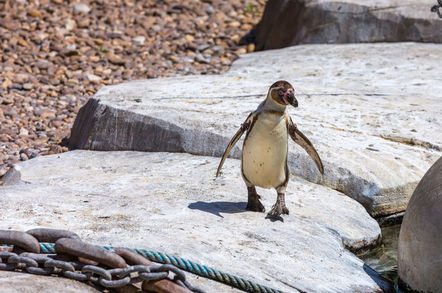 Driving Hyperledger was the notion of a blockchain, a distributed ledger whose roots are in digital currency Bitcoin, for the Linux ecosystem - a reference technology stack that those comfortable with a command line could experiment with and build their own blockchain systems and applications.

Behlendorf, the project’s executive director, said upon assuming command in May 2016: “There are lots of things that we want to see built on top.”

Back in 2016, people were just starting to create proof of concept apps using the prototypical version of what would become Fabric, the core Hyperledger blockchain system. A lot has happened since then.

So where are we three years on?

The Hyperledger stack has grown. July 2017 saw the release of version 1.0 of fabric, while some other projects have joined the mix.

These include Sawtooth - contributed by Intel - for those who want to build their own ledgers. Its consensus mechanism relies on extensions in Intel processors, though, limiting it to that architecture.

There’s a Hyperledger-based blockchain framework called Iroha, Cello for hosting business blockchains on multi-tenant infrastructures - ticking the “as a service” box that other initiatives like Ethereum have already satisfied – and Indy, a digital identity framework including libraries and reusable components for identity management.

Great. But is anyone actually using it? Behlendorf isn’t in a position to track these things, he says. Rather he points out the rise in nontrivial contributors who form the elector pool for the project’s technical steering committee (there are 360 this year, compared to just over 100 last year).

“We do have anecdotal evidence around IBM closing 400 business deals around blockchain-based technology, and Hyperledger is their technology of choice,” he told The Reg.

The Depository Trust and Clearing Corporation (DTCC) – the bookkeeper for Wall Street security trades – chose IBM to develop a distributed ledger software for post-trade processing, which means that some Hyperledger technology is likely to be involved. Financial settlements have been a much-lauded killer app for blockchain ledgers, because it is currently so inefficient. The talk is of moving from T+3 (settlement three days after trade) to T+0.

Another oft-cited use case is tracking the provenance of goods. Everledger, a company that tracks high-value goods, used the IBM blockchain technology underpinning Hyperledger Fabric to create its system. It tracks diamonds across the world using their individual physical footprints, which can be digitally measured. It hopes to reduce jewellery fraud by effectively digitizing the paper-based Kimberley process diamond tracking method.

While uptake of Hyperledger might range somewhere between embryonic and uncertain, the numbers of those expressing support for Hyperledger has certainly grown.

New members of note from the financial community include the Korea Securities Depository, the Gibraltar Stock Exchange and American Express. Manufacturers are in the tanks, too, with Airbus from aerospace and Daimler from automotive. There are also startup entrants from healthcare, hoping to use blockchain to manage patient records and untangle the complex web of payer settlements in the US healthcare system.

One thing that stands is representation from China. They span a range of sectors, showing how seriously the country is taking the blockchain concept even if it isn’t too enthusiastic about crypto currencies of late.

One Chinese firm, Wanda, the richest company you’ve never heard of, pulled down about $96bn in revenues last year and has its hands in all kinds of businesses, including sports and media. It is also the world’s largest owner of five star hotels.

Also on board is Monax (formerly Eris). This is particularly notable because Monax bought with it an Ethereum virtual machine to more closely align the Ethereum and Hyperledger communities. That now forms the basis of Burrow, a smart contract module project under the Hyperledger banner. Ethereum, the smart contract-based blockchain announced in 2014, had a couple of years’ head start on Hyperledger and has used them well. It was already in serious conversations with banks just as Hyperledger was getting started.

Projects like Monax’s EVM notwithstanding, the two organizations seem to be at arm’s length.

“There’s a difference in philosophy and we're not really public chain focused,” Behlendorf told us. Ethereum started as a public-focused chain, but it is expanding. Its launch of the Ethereum Enterprise Alliance in February this year shows that it is getting serious about permissioned chains too. It is backed by the likes of BP, JP Morgan, Microsoft and WiPro, among others. There’s an overlap between its membership and Hyperledger’s, showing that companies are hedging their bets.

There’s also a licensing disparity between the two organizations. “Different parts of Ethereum have different licences, and with some bits of Ethereum they don’t even know how it’s going to be licensed,” according to Forrester principal analyst Martha Bennett. Typically, Ethereum uses the GPL-3. “That precludes commercial use of Ethereum if you put any bells and whistles on it.”

“We think it's better to have a single production quality Apache License implementation,” affirms Behlendorf. This sticking point alone likely nixes any closer relationships between the two.

Traditionally, in this industry, the presence of lots of people in a community talking something up combined with little physical evidence of deployments have been sure signs that the subject in question is being over hyped. Is Hyperledger, therefore, suffering from a case of hype?

As with much emerging tech it’ll have to go through the regular Gartner hype cycle first. That particular analyst firm reckons it’s on its way down into the trough of disillusionment.

It expects blockchain to reach a healthy, stable plateau in five to 10 years, which ties in with Behlendorf’s assertion that blockchain now is where the web was in 1994. What’s good for blockchain is good for Hyperledger. That future date should be when, it is hoped, most companies will have both woken up to its existence and managed their expectations about its possibilities.

A solution looking for a problem? It doesn't have to be

In the meantime, blockchain will have its fair share of credulous onlookers trying to apply it to business problems that don’t yet need it. Bennett isn’t one of them.

“We need to drive the technology further, but we need to look at use cases end to end. With a lot of them the real issue isn't tech, but market structure,” she told The Reg. “You have to change the market structure or blockchain won't do it. And that may involve engaging with regulators.”

That might be harder than it looks. Alan Pelz-Sharpe, founder and principal analyst at Deep Analysis and sometime Reg writer, points out a number of challenges.

One is technical. Remember all those projects? Pelz-Sharpe calls them “bits and pieces” from all over the place that mean Hyperledger doesn’t always fit together as it should. Another issue is acceptance of blockchain itself in the real world, outside that of tech companies. “You and I can argue that a transaction done in a blockchain is binding and immutable,” he says. “Where does it say in any legal context that a blockchain transaction is a legal mortgage?”

Similarly, getting regulators in various nations to agree to use the blockchain to handle international shipping paperwork – let alone agree on the same standard – will be no mean feat.

That’s a broader blockchain problem, but Hyperledger will also have its own unique challenges along the way, warns Pelz-Sharpe. He suggests that its heavy-hitter members could be a mixed blessing.

“Its biggest strength is that Fabric was built by IBM - but also its biggest weakness,” he says, fretting that Apache Software License or not, some competitors may be turned off by Big Blue’s central involvement.

We're three years into Hyperledger. The project has come a long way in that time while Behlendorf has form to take it further. He co-founded the Apache Foundation and wrote a lot of the underlying server, still the industry’s most popular web server after all these years. Behlendorf sits at the intersection of technology and community building.

On that basis, over the next 18 months, we could see a rounding out of the Hyperledger technology stack and larger-scale deployment projects. It’s a force to be reckoned with. Potentially. ®