Astroboffins say our Solar System could have – wait, stop, what... the US govt found UFOs?

Forget the supernovae, what's this about alien alloys? 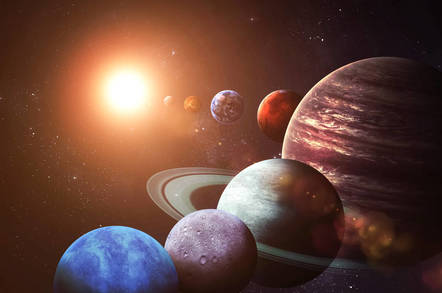 Our Solar System may have been born from bubbles of material hurled from a colossal Wolf-Rayet-type star, according to a theory published Friday.

Scientists studying the origin of our system generally believe – no, wait, sorry. Stop. You know 2017 has been a bonkers year when the New York Times reveals a classified $22m US military program to investigate UFOs – complete with grainy videos of possibly alien spacecraft and claims of finding out-of-this-world alloys – and no one blinks an eye.

Did you miss that report? Quite a few people did. It came out on Saturday. And everyone was distracted by politics, hackers, longing looks at 2018, Christmas shopping, we dunno. Just letting you know.

Where were we? Oh yeah. The Solar System. Scientists generally believe our system formed near a supernova – an exploding dead star that emits shockwaves of energy and a shower of elements that kickstart the formation of a new star. As one of these protostars matures, leftover material in the shape of a disc clumps together to create planetesimals and eventually planets. That's pretty much how boffins think our system was created.

Now, however, a bunch of physicists reckon – look, OK. Sorry. Very cool research, but time out.

This New York Times story. It was written by a couple of Pulitzer Prize winners and one of their colleagues. It feels like it should be significant, but, what are we dealing with here? Blurry video and audio recordings of UFOs spotted by pilots in Navy F/A-18 Super Hornets. Is it just... bollocks, or what? This particular program was scrapped in 2012 after five years. Is it a convenient cash cow for aerospace research companies? Oh sure, we'll take a look at these UFOs, here's our not inconsiderable invoice.

On the surface, this NYT exposé looks exciting, but, just, what exactly was proven by Uncle Sam's classified probe into UFO sightings – anything? The videos look like a bug got stuck on the Navy jets' sensors.

Right, sorry. Real science. Focus. So, these physicists have put forward an alternative scenario for the formation of our Solar System, describing it in a paper published in The Astrophysical Journal this week.

They point out that our system has an abundance of aluminum-26 and not a lot of iron-60 compared to the rest of the Milky Way galaxy. If the system was formed from a supernova, it would have a relatively rich amount of both isotopes, yet like a pale nerd, it is iron deficient.

Vikram Dwaradas, coauthor of the paper and a research associate professor in astronomy and astrophysics at the University of Chicago in the US, said supernovae release both aluminum-27 and iron-56. So “it begs the question of why one was injected into [our] Solar System and the other was not."

Hold that thought. Speaking of metals, these mysterious, unknown alien alloys the US government apparently found. It's freaking some people out. We're obviously not talking machined metal, right? Actual alien spacecraft parts landing on Earth. A fucking wing fallen off the back of an intergalactic lorry. No way. Where's the mass panic? No one's batting an eyelid. These alloys have got to be just rocks from space. Flecks of metal from another corner of the galaxy littering our planet. Sorry, it's just too distracting right now.

This lack of iron isotope in our Solar System. The physicists have turned to Wolf-Rayet stars for an answer. These are gigantic hot stars, and are more than 40 times the size of our Sun. As they burn, they produce copious amounts of elements that are spewed across space via a powerful stellar wind.

The key thing here is that Wolf-Rayet stars create lots of aluminum-26 and little iron-60, and their output is therefore a close match to the conditions at the early stages of our Solar System.

So, forget a dramatic supernova. A Wolf-Rayet star likely kickstarted and fueled our system, and is responsible for the nonsense world we live in now, according to this study.

The stellar wind sends ripples through the Wolf-Rayet star’s surrounding debris, causing dense shells of material to form around bubble-like structures. Nicolas Dauphas, coauthor of the paper and a professor of geophysical sciences also at the Chicago uni, said "the shell of such a bubble is a good place to produce stars."

The dust and gas within each sphere can be compressed to form stars. The researchers estimated that between one per cent to 16 per cent of all Sun-like stars could be forged in these environments.

"The idea is that aluminum-26 flung from the Wolf-Rayet star is carried outwards on grains of dust formed around the star. These grains have enough momentum to punch through one side of the shell, where they are mostly destroyed – trapping the aluminum inside the shell," Dwarkadas explained.

The shell collapses inward due to gravity over time, ultimately forming a solar system. The Wolf-Rayet star that may have been our stellar nursery would have burned out and died long ago. The researchers argued that even if it ended its life as a supernova, the iron-60 may not have penetrated the walls of the bubbles nor be equally scattered through the surrounding space. If it collapsed into a black hole, it would also have produced small amounts of iron-60.

Suddenly, the notion that there are alien metals on Earth and all around us in space isn't so crazy. We are all made of stars. Merry Christmas. Now, where's our $22m? ®