That sliding-doors moment – how Ginni chose the wrong exit 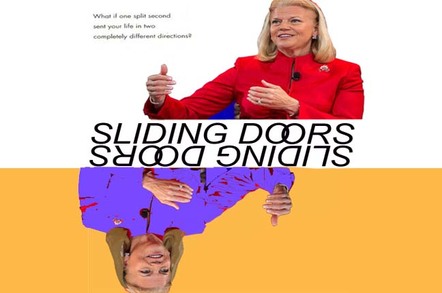 The past six years have been unkind to IBM but top brass only have themselves to blame: the firm generated tens of billions of dollars but bought back shares and returned money to investors rather than doing something radical.

This is according to respected Wall Street number-cruncher Tony Sacconaghi at analyst Bernstein, who looked at the use of the $76.8bn in cash he estimated Big Blue created between 2012 and 2017 (to date) and the $15bn debt it took on.

"The company generated $92bn in cash but chose to return 80 per cent of this cash to shareholders in dividends and buybacks," he said in a research note sent to The Register. "Buybacks have amounted to nearly $50bn."

All of this while IBM sales declined for 22 straight quarters and pre-tax profit slipped from around $23bn to $14.3bn. During this time, IBM pursued a historical financial model targeting low to single-digit revenue growth and high single-digit earning per share.

"In retrospect, it is evident that IBM management underestimated the headwinds that its business would face... the question, of course, is 'What could IBM have done differently?' Admittedly, hindsight is always 20/20," said the Bernstein man.

IBM to expunge over 500 people in latest redundo round

The sliding-doors moment could have seen IBM pursue an "aggressive portfolio reconstruction" by using the money at its disposal to buy Salesforce.com for $20bn or PaaS player ServiceNow for $4bn-5bn in 2012.

"We can't help wondering whether instead of betting on itself (which is effectively what buybacks amount to), IBM ought to have more aggressively pursued acquisitions (and divestitures) to reconstitute its portfolio and diversify its proverbial bets," said Sacconaghi.

"The $47.5bn spent on buybacks could have been used to purchase many of the same SaaS businesses that continue to threaten legacy tech companies today. Alternatively, IBM could have generated additional shareholder value by spinning off non-critical divisions such as GBS (Global Business Services) or part of its software business," he added.

El Reg has wondered if IBM might just offload Global Technology Services – its outsourcing business that moved into cost-cutting mode about three years ago and has been in the same gear ever since.

Bernstein looked at the US enterprise software market at the start of 2012, with 20 companies valued between $2bn and $40bn – the median value was $8.1bn. But in the subsequent near-six years, the market cap of those 20 firms grew 162 per cent. IBM was flat during that period.

"In other words, virtually any incremental acquisitions in this space would have been likely to improve IBM's stock performance, even after accounting for takeout premiums and a sum-of-parts discount."

Sacconaghi said IBM was used to selling "solutions" comprised of hardware, software and services. This made Big Blue an "unlikely target for breakup", but he pointed to HP's series of splits, and Xerox offloading its services ops, the result of which were "generally" considered to have been "value creating".

"For IBM specifically, portfolio moves might be more difficult than others because of its integrated go-to-market approach, but we think it is plausible that the company could have spun off its GBS division and its GTS business, or look to sell some of its mature software offerings."

The cash from these could have been used to in part to fund buys or initiatives that sped up organic growth.

The second option – or sliding-door alternative – was all about "cash maximisation", Bernstein added.

"IBM could have embraced the decline of its core businesses, and doubled down on cash maximisation, a la DXC or Micro Focus. For this to work, IBM would have likely needed to explicitly acknowledge/target a low signal decline in revenues and focus on increasing cash generation and return on investment, much like LBO (leveraged buy-out) companies do post-acquisition."

This would have resulted in deeper and more aggressive cost-cutting, including "harvesting high margin, declining businesses, culling R&D on IBM's glamorous but still unrealised projects, and performing strict ROI analysis on incremental investments".

Of course, the upshot of this would mean IBM was left trying to drive margin uplift and better cash flow, "despite modest declines in revenues".

But none of these things happened and, as Bernstein said, hindsight is a wonderful thing. So where to from here? The "historical status quo has generally not worked", the analyst's paper stated.

Sacconaghi said IBM was a "conservative" buyer – it hasn't spent more than $4bn on an acquisition – and so has no institutional experience in integrating "material" purchases.

"Accordingly, integration risk is significant. Moreover, we acknowledge that for every highly successful acquisition we have seen in the IT hardware space, there is an equally woeful one, like HP's purchase of Autonomy. That said, we can't help wondering whether the traditional playbook is simply not working – and that IBM ought to potentially re-examine its capital allocation priorities and strategy going forward."

IBM will report its calendar Q4 results next month, when the tech industry will discover if it will be reporting 23 quarters without growth.

Sacconaghi signed off by saying that IBM was "still very much in the throes of a turnaround", which is what Big Blue's CEO always says during quarterly results calls. It is also a phrase much used by HPE's outgoing CEO Meg Whitman: she said it for six years during her reign and only recently, the last quarter in fact, did it ring less hollow. ®