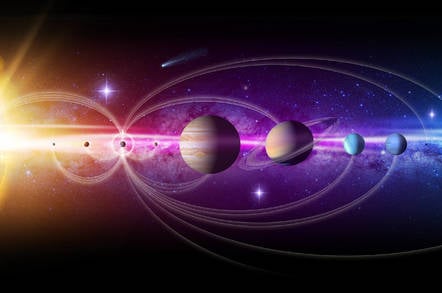 NASA is drawing up plans to send a robot out into space to either drill into the comet 67P/Churyumov-Gerasimenko – or checking out Titan, Saturn’s largest moon.

The two proposed missions are still in their very early design phases, and were chosen from 12 ideas submitted in April to the American space agency’s New Frontiers program, a longstanding investigation into the bodies that make up the Solar System.

The Comet Astrobiology Exploration Sample Return (CAESAR) involves Earth's boffins revisiting comet 67P. In 2014, the European Space Agency successfully put its Rosetta spacecraft in orbit around the rubber-ducky-shaped comet. The probe had a lander module named Philae that touchdown on the cosmic rock hundreds of metres from its target landing area in a spot of shade, where it was unable to power itself with sunlight.

ESA’s Rosetta mission is now over. With CAESAR, NASA has a similar goal in mind – namely, studying the comet’s origin and history – however, it plans to bring back a sample of the space rock.

Its second proposed mission, Dragonfly focuses on building a “drone-like rotorcraft” that will hover around Titan. This moon has been identified as an “ocean world” in our Solar System, and is the only moon known to hold an atmosphere – both vital conditions for potentially harboring life.

There is convincing evidence that it contains seas and lakes of liquid ethane and methane, and gaseous nitrogen, methane and hydrogen.

Thomas Zurbuchen, associate administrator for NASA’s Science Mission Directorate, said on Wednesday: “This is a giant leap forward in developing our next bold mission of science discovery. These are tantalizing investigations that seek to answer some of the biggest questions in our solar system today.”

NASA will fund the CAESAR and Dragonfly missions through the end of 2018 so that scientists can develop and refine their ideas. The next stage will be in spring of 2019, when the agency will have to choose between one of the two missions for its New Frontiers program.

The selected concept will continue as the fourth New Frontiers’ mission after New Horizons, a journey to Pluto; Juno, an exploration into Jupiter; and OSIRIS-REx, the plan to send a spacecraft to asteroid Bennu.