How much will Britain's next F-35s cost? Not telling, says MoD 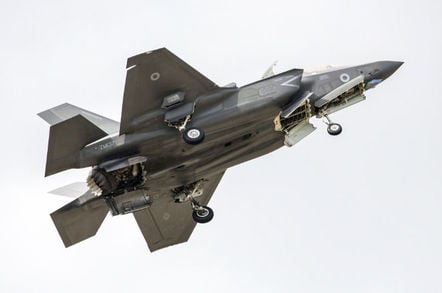 The British government has refused to say how much new F-35 fighter jets will cost the nation – as it emerges that no fighting ships of the Royal Navy will be in foreign waters during the festive period.

The House of Commons' Defence Committee, formed of MPs who supposedly scrutinise the Ministry of Defence's activities, asked the question – and specifically asked for the cost per aircraft including spares, upgrades and retrofits.

The MoD did not answer, according to reports of the committee's session earlier this week – while refusing to give even broad-brush cost estimates for the British F-35 programme beyond the year 2026.

Previously it emerged that F-35Bs for Britain would cost around $123m each, not including spares and so on. While the MoD is publicly committed to buying 138 F-35s, it has been ambivalent over whether it intends to buy all B-model F-35s, optimised for short takeoffs and vertical landings as required to operate from Britain's two new aircraft carriers, or the A model, which is a conventional land-based jet fighter.

As more pressure is applied by MPs to the ministry, more is beginning to emerge on Britain's F-35s dealings. Namely, we've ordered 48 for delivery up until the mid-2020s – and after that it's anyone's guess what will happen.

48 aircraft – that is, four squadrons' worth – is just enough to operate a single aircraft carrier, taking into account land-based training and maintenance. It is not enough to operate two carriers at full squadron strength, though that is the ministry's plan.

In other news, The Times reported that, for the first time in modern history, no Royal Navy fighting ships – destroyers, frigates, amphibious assault ships or carriers – would be operating away from Britain over Christmas and New Year.

This comes as a result of sensible guidelines that make it a priority for sailors to get home and see their families over the festive season. It is no bad thing from that point of view. On the flip side, thanks to Type 45 destroyer HMS Diamond breaking down en route to the Gulf, this is now a breach of the usual operational plan. There are no warships able to take her place until January at the earliest.

The Gulf deployment is a vital bit of peacekeeping (it stops troublemakers from closing off vital shipping chokepoints or interfering with merchant traffic, as Iran does from time to time) and keeps the British flag flying prominently on the doorsteps of oil-producing nations who we are very dependent upon.

While other, small, warships are at sea, no vessels designed for smiting Her Majesty's enemies are out and about – illustrating the point that the RN is overstretched and the defence budget needs to grow. Key to British defence policy is credibility; if you don't look like you can walk the walk, nobody's going to take you seriously when you talk the talk. ®