This is the browser maker's Apple U2 moment 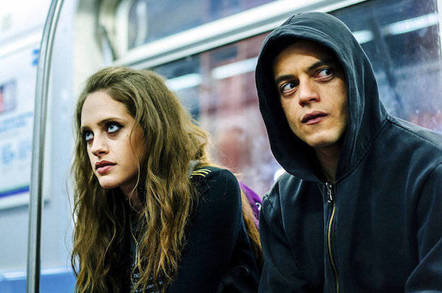 Updated Mozilla automatically installed a weird add-on to Firefox on people's computers – an add-on that turned out to be a marketing promotion for the hit telly show Mr Robot.

The open-source non-profit dev house secretly slipped the oddity, dubbed Through the Looking Glass, into browser installations as a shield study. These special extensions are experimental Firefox features pushed by Mozilla to a select number of punters for testing before being released to the public. By default, Firefox automatically accepts and runs these studies.

In this case, Looking Glass was pushed to a big bunch of people – seemingly everyone who kept the default settings – and was intended as a game to promote the hacker-centric TV suspense-drama. Looking Glass, when activated, would alter webpages participating in the, presumably paid-for, Mr Robot promotion, to present web surfers with puzzles, clues, and similar stuff.

Are you a fan of Mr Robot? Are you trying to solve one of the many puzzles that the Mr Robot team has built? You’re on the right track. Firefox and Mr Robot have collaborated on a shared experience to further your immersion into the Mr Robot universe, also known as an Alternate Reality Game (ARG). The effects you’re seeing are a part of this shared experience.

Mr Robot – which followed its strong first season in 2015 with a weak second series and bounced back in the third – and Mozilla both make a big deal out of protecting people's privacy. Last week, it was Moz's turn to lose the plot, pull an Apple-U2, and automatically install a TV show promotion in its browser. Netizens quickly spotted the plugin, reporting it as a possible piece of malware. We also clocked the study appearing in The Register's copies of Firefox.

After more users, most of whom did not watch the cable TV show and thus did not get the reference, erupted with fury, Mozilla backtracked on the botched advertising campaign. Fresh installs of Firefox no longer have the shield study, and the extension has been moved to Moz's browser add-on store.

"I absolutely did not opt-in to that add-on," raged one Redditor.

"I didn't know Mozilla would betray my trust this way. I wasted a few hours trying to figure out that the hell this new, spyware-looking, unwanted extension was.

"Mozilla folks, what you did with this add-on this was stupid and moronic. Most users are not programmers; most people don't watch Mr Robot; and most people are not going to waste a bunch of time tracking down stupid crap like this. Your actions here simply drive most people into the hands of Google, Microsoft, and Apple browsers."

Reviews on the extension were ... less than positive

"Our goal with the custom experience we created with Mr Robot was to engage our users in a fun and unique way," Mozilla said in a statement on the debacle to El Reg late on Friday.

"And so while the web extension/add-on that was sent out to Firefox users never collected any data, and had to be explicitly enabled by users playing the game before it would affect any web content, we heard from some of our users that the experience we created caused confusion."

Essentially, go to about:studies and remove the add-on if it is still present – and maybe opt out of the studies from your preferences to avoid receiving any other weird updates. Meanwhile, the code for Looking Glass has been released on GitHub. ®

Mozilla chief marketing officer Jascha Kaykas-Wolff has posted a mea-culpa on the Mozilla blog. "We’re sorry for the confusion and for letting down members of our community," Kaykas-Wolff wrote.

"While there was no intention or mechanism to collect or share your data or private information and The Looking Glass was an opt-in and user activated promotion, we should have given users the choice to install this add-on."

The exec also said Mozilla did not sell out its loyalists to a TV network – this was done for free.

"Over the course of the year Firefox has enjoyed a growing relationship with the Mr Robot television show and, as part of this relationship, we developed an unpaid collaboration to engage our users and viewers of the show in a new way," Kaykas-Wolff explained.

Somehow, that just makes it even worse.