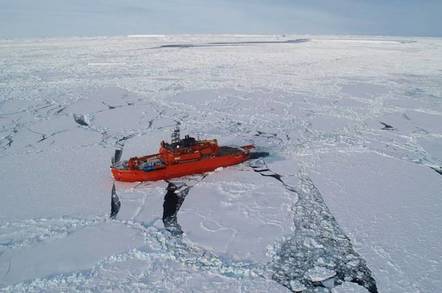 A NASA team is heading on a trip arcing around the South Pole to check that their new satellite's measurements from space are just as good as their own back on terra firma.

The ICESat-2 (Ice, Cloud and land Elevation Satellite-2) will launch next year, tasked with measuring elevation around the world to investigate the changes to the planet's cryosphere (the icy bits of Earth) due to climate change. As its ATLAS laser altimeter system will examine areas in the Antarctic previously unmeasured, the four-person NASA team – made of two scientists, a mechanic and a mountaineer – is travelling ahead to provide a second set of data.

The quartet arrived at McMurdo Station earlier this week, and will fly to the South Pole shortly. After acclimatising to the low temperatures and high altitude, they will begin the 470-mile journey using PistenBully snow transports. The intrepid band will travel to the 88th meridian, a line which the satellite will cross multiple times during its orbit, follow the meridian for 186 miles, then return to the South Pole, a route which will take around two weeks minimum.

To assess ICESat-2's accuracy, the team will examine snow density by digging and using ground penetrating radar to take measurements. These numbers, when taken with ICESat-2's total elevation data, will reveal how the ice sheet below changes over time.

They will also place grids of reflective cubes at sites they have measured along the 88th meridian. These will reflect the light back at the satellite at a greater intensity which will be recorded. The team can then compare their data with the satellite's when the expedition concludes and they return to the US with the information.

"ICESat-2's datasets are going to tell us incredible things about how Earth's ice is changing, and what that means for things like sea level rise." ®