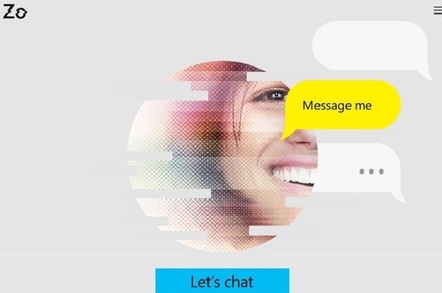 Microsoft has bunged a load of AI-powered features into its software – from Azure and Office 365 to Bing and Cortana.

The capabilities, a large collection of individually minor updates and new stuff, are part of an effort by the Windows giant to translate its machine-learning research work into things that will actually matter for day-to-day users. From dev to prod, in other words.

"We believe that AI comes down to one thing: people," Microsoft AI and research VP Dr Harry Shum gushed during a presentation to Silicon Valley's tech press in San Francisco on Wednesday. "AI will amplify human ingenuity, making people the heroes."

A vendor just told El Reg: "We believe AI comes down to one thing: people!"

Next up, veggie burgers come down to one thing: beef.

The Bing search engine will be the biggest beneficiary, with Microsoft rolling out new features designed to improve natural language searches and the handling of images.

Microsoft's search engine will also get a deeper tie-in with internet gossip lounge Reddit. An expanded partnership deal will see features like improved Reddit forum search and the ability to scope out upcoming ask-me-anything Q&As when using Bing.

Side note: At the event Reddit cofounder Alexis Ohanian amazingly declared "Reddit is the one social network that isn't anti-social." This has nothing to do with the rest of the article, we just wanted to point that out.

Of more relevance to enterprise and small-to-medium biz customers will be new AI and learning-based assistant features for Office 365. Microsoft said the Office suite will be better able to pull content across multiple documents (for example, looking up a definition or the meaning of acronym on another OneDrive document).

Word will sport improved editing suggestions and corrections, while PowerPoint will have improved auto-formatting and Excel will look to offer better search and reporting capabilities. Outlook will also look to beef up its search and scheduling by integrating improved machine learning and personal assistant code.

If chatty electronic personal assistants are more your drug, Microsoft has packed a number of new features into Cortana. The cyber-minion has been given improved speech and scheduling abilities, as well as better integration with third-party skills and apps.

Android users will also be able to run Cortana as a launcher soon, both on its own and in a partnership deal with Cheetah Mobile. The hope is that Microsoft, lacking a credible smartphone OS of its own, will instead be able to battle the likes of Google and Apple by playing up integration with Windows and Office 365.

Finally, Azure's chat-bot service is now generally available. You can find a technical guide to the API here. Funnily enough, no mention of Tay. ®

PS: Before anyone gets upset we're being too dismissive and skeptical of Microsoft, just think of us as an antidote to the cynical laundering of the Redmond software giant, which fields its CEO, Satya Nadella, out to cosy US cable TV.