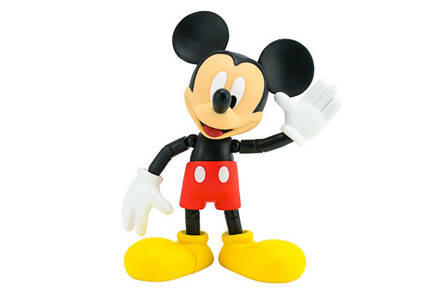 Most of Rupert Murdoch’s 21st Century Fox empire is being flogged to Disney for $66bn, including large chunks of the film and telly businesses.

An announcement from the Walt Disney Company, as old Walt’s empire is formally known, said that a “definitive agreement” had been entered into between 21st Century Fox and Disney.

“Building on Disney’s commitment to deliver the highest quality branded entertainment, the acquisition of these complementary assets would allow Disney to create more appealing content, build more direct relationships with consumers around the world and deliver a more compelling entertainment experience to consumers wherever and however they choose,” giggled company spokesman Michael T. Mouse.*

Bob Iger, chief exec of Disney, whose tenure is being guaranteed until 2021 as a result of the deal, said in a canned quote: “We’re honoured and grateful that Rupert Murdoch has entrusted us with the future of businesses he spent a lifetime building.”

For his part, the Dirty Digger, exec chairman of 21st Century Fox, said: “I firmly believe that this combination with Disney will unlock even more value for shareholders as the new Disney continues to set the pace in what is an exciting and dynamic industry.”

Included in the transaction are the 21st Century Fox film and telly studios, plus “cable and international TV businesses,” with the latter currently including a piece of Sky in the UK.

Fox is expected to complete its planned buyout of the 60 per cent chunk of Sky that it doesn’t own prior to the Disney takeover, said the latter’s statement, meaning Disney will buy Sky and its 23 million British subscribers. (This suggests that behind the scenes, British ministers have given the green light to that controversy-stricken deal.) Disney added that it reckons the Fox/Sky buyout will complete by June 2018.

However, the Fox Broadcasting network and stations will be spun off into a “newly listed company”.

Paolo Pescatore of analyst haus CCS Insight commented on the big news: “The move will firmly establish Disney as one of the leading media companies in the world and puts it in a great position to compete head on with the threat posed by the Web providers such as Amazon and Facebook. With its slew of franchises, which will continue to grow, it is well placed to generate new sources of revenue.”

This is the key part of the transaction for Disney. Fox has a huge portfolio of moneymaking film and cartoon franchises, including The Simpsons (which, it has been pointed out, predicted the buy back in 1998), to name but one. Those guaranteed revenue streams allied to Disney’s already bulging pockets will create a world-dominating entertainment player that is well placed to fend off Amazon and Netflix with competing offerings.

Mickey isn’t actually the Disney corporate spokesman. Just in case anyone out there was dim enough to take that seriously.