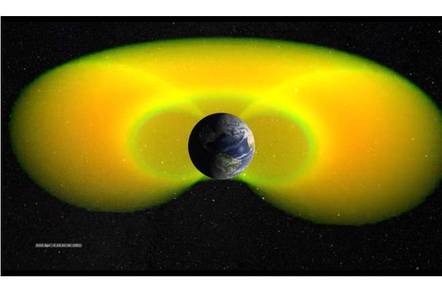 Scientists have solved a 60-year mystery by figuring out the source of harmful and highly energetic electrons whizzing around in Earth’s inner radiation belt.

Space is more than the final frontier. It is treacherous beyond belief. Earth is circled by swarms of charged particles, starting from 500km out to a distance of 58,000km, all clumped together by our planet’s magnetic field. They form the Van Allen belts, can damage the electronics and sensors in passing satellites and space probes, and can subject astronauts to doses of radiation.

There are two seemingly permanent radiation belts, described as the inner edge and outer edge, plus a temporary one spotted in 2013. When the first pair were discovered in 1958, scientists proposed that the particles within the regions were put there by a process called cosmic ray albedo neutron decay (CRAND), in which cosmic rays smash into neutral atoms, causing them to break apart into protons and electrons. These charged particles are then trapped by Earth’s magnetic field and form the belts.

But, fast forward six decades to 2017, and, er, no one has actually detected the electrons formed during the proposed decay of the neutrons.

Now, a paper published in Nature on Wednesday this week describes how a team of boffins found electrons in the inner edge of the Van Allen radiation belt, confirming the earlier theory.

Xinlin Li, lead author of the paper and a professor at the laboratory for atmospheric and space physics at the University of Colorado, USA, said: “We are reporting the first direct detection of these energetic electrons near the inner edge of Earth’s radiation belt. We have finally solved a six-decade-long mystery.”

The gang's work shows that the particles are formed by deadly cosmic rays fired from supernova explosions. These powerful rays ram atoms near Earth, causing the neutrons to decay into protons and electrons via the CRAND process, and these offshoots get caught up in the Earth’s magnetic field. And voila, that's how our world got its radiation belts.

The team used a small shoe-box sized particle telescope – which was built by undergraduate and graduate students at the university and blasted into orbit in 2014 as a CubeSat mission – to measure the flux of energetic solar protons and electrons from the radiation belt over two years.

Daniel Baker, co-author of the paper and a professor also at the university’s space physics lab, called the result “a major discovery," adding that “you can observe a lot just by looking.”

The eggheads hope it will help fellow scientists build up a better picture of the space environment near Earth and its effects – helping to prepare and protect probes and people flung into the obsidian oblivion through the radiation cloaks. ®