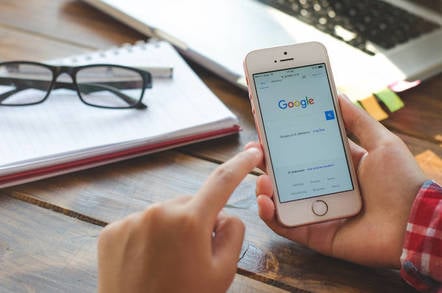 In a complaint filed in a US district court in San Jose, California, on Wednesday, the ad biz claimed Google failed to refund almost $500,000 paid to place ads on websites that drove invalid traffic, in violation of Google rules.

Claiming that this is a pattern of behavior, the complaint seeks recognition as a class action for Google's alleged false promises to refund advertisers for ad impressions placed through Google's DoubleClick Ad Exchange deemed to be invalid.

Invalid traffic, a euphemistic wrapper covering both deliberate ad fraud and inadvertent failure to puts ads in front of actual people, represents either a minor issue or an existential threat to the online ad business, depending upon whom you ask and the type of advertising considered.

This issue has come up before. In 2006, Google agreed to pay $90m to settle a click fraud claim brought by Lane's Gifts and Collectibles. And in April, 2017, it agreed to pay $22.5m to settle an adwords click fraud class action, covering the period from July 11, 2004 through March 31, 2008. An AdWords fraud lawsuit filed in California by Free Range Content in 2014 remains ongoing.

The AdTrader complaint cites a recorded phone call with Google's director of online partnerships, Anthony Nakache, who is alleged to have said Google would refund money spent by advertisers on invalid traffic. Such payments were never made, the lawsuit claims.

"What's really outraging is they're lying about what they do with the money," said Dobromir Kamburov, co-founder of AdTrader, in a phone interview with The Register.

If it were a case of Google withholding money from publishers trying to game the system, he said, that would be fine.

"But if in reality, no advertiser has received anything, that's a problem," he said.

Kamburov said his company is in a position to know because it manages multiple advertiser accounts through Google's DoubleClick Bid Manager and some of the websites the firm targets happened to be under its publisher account.

Because it represents both ad buyers and sellers, AdTrader can check whether payments and refunds tally. According to the complaint, Google withholds money from publisher sites for supposed invalid traffic but doesn't refund a corresponding amount to advertisers.

"When Google refused to pay, we started digging in our records, so we were able to make a comparison and really see what's going on," he said. "They always say they're refunding some amount of money due to fake traffic. So advertisers should be getting refunds. But they're not."

AdTrader claims to have asked a large New York ad agency and several European agencies whether they or their clients had ever received refunds for invalid activity and none of them had, despite reports from publishers that Google every month finds a certain percentage of ad clicks or ad impressions to be invalid.

"Google has been unjustly enriched by keeping for itself all advertising funds that were spent on invalid traffic instead of refunding those amounts back to AdTrader and the other [advertisers]," the complaint says.

What's more, ad shop alleges that Google tried to "destroy AdTrader's business" by unjustly terminating its DoubleClick Ad Exchange account and by trying to steal away a significant client, DingIt.tv, and parent company Level Up Media.

The lawsuit contends that a Google employee had warned the ad biz privately that Google's Network Partner Managers like AdTrader "would mysteriously start getting into trouble with Google once they reached an annual revenue run rate of $4-5 million."

The suggestion is that Google regularly tries to woo advertising customers away from its partners, into a direct business relationship, once they get big enough.

Google did not respond to a request for comment. ®

“We look forward to reviewing the specific complaint,” a Google spokesperson told us in a statement we received after this story was published. “From what we have read in the press, these allegations are without merit. We have a longstanding policy of refunding advertisers for invalid traffic. As we recently announced, this is currently being expanded to include ads purchased via DoubleClick Bid Manager.”