Come for the free movies, stay to dig Monero for a stranger 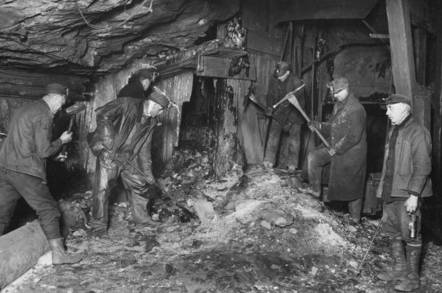 According to AdGuard, the massive Monero-mining operation was discovered when ad-blocking plugin developer was fine-tuning its ad blockers to catch and block sites that attempt to hijack web surfers' spare CPU cycles for mining.

"While analyzing the first complaints, we came across several VERY popular websites that secretly use the resources of users' devices for cryptocurrency mining," AdGuard cofounder Andrey Meshkov explained this week.

"According to SimilarWeb, these four sites register 992 million visits monthly. And the total monthly earnings from crypto-jacking, taking into account the current Monero rate, can reach $326,124.85."

AdGuard says the sites – openload, Streamango, Rapidvideo, and OnlineVideoConverter – are often linked for other pages as embedded players, increasing their reach over hundreds of millions of visitors.

"We doubt that all the owners of these sites are aware that the hidden mining has been built in to these players," noted Meshkov, meaning the servers may have been hacked to inject the mining code into browsers.

As with other mining schemes, the sites used Coinhive's software to silently generate Monero coins without users noticing anything other than a slowdown of their machine. AdGuard said it had updated its plugins to catch the activity. Other ad-blocking plugins and antivirus packages also kill Coin Hive's JavaScript code on sight.

The discovery is the latest in a huge wave of websites that are loading up (both with and without the operators' knowledge) alt-coin mining software to co-opt the compute cycles of visitors to help generate cryptocurrency.

With the value of digital currencies skyrocketing in recent weeks – Monero, for one, leapt from $90 to $300 apiece in about a month – covert methods of generating the crypto-wonga have become ever more popular. Earlier this week, for example, researchers found that a Wi-Fi operator in Argentina was compromised to load up coin-mining code in the browsers of machines connected to the public network.

"At the moment, the only real solution is to use an ad blocker, an antivirus or one of the specialized extensions to combat crypto-jacking. Unfortunately, not all users know about the problem or want to use such software," Meshkov said.

"The only way to completely close the issue of browser-based mining is to implement security mechanisms at the browser level." ®