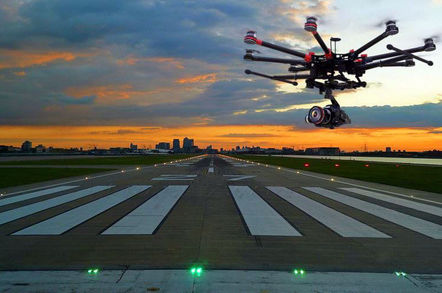 Fellow Americans: if you receive a drone as a Christmas gift this year, you will probably have to register it with the US federal government.

President Trump today signed into law the National Defense Authorization Act for 2018 that will reinstate rules created by the Federal Aviation Administration (FAA) in 2015 that required owners of any drones over 0.55lb to register their gizmos with the watchdog – and pay a $5 registration fee – or face criminal charges.

Some 800,000 drone owners did exactly that, coughing up the dosh and handing over their details, according to the FAA, but one hobbyist – John Taylor – took exception to the rules, and argued in court that the agency doesn't have the right to decide what is a model aircraft.

After winding its way through the legal system, in May this year the US Court of Appeals in Washington DC agreed with him – and the argument the drone database violates another piece of FAA red-tape that says the watchdog cannot "promulgate any rule or regulation regarding a model aircraft."

So the database ground to a halt, and the FAA offered a full refund for registration – an offer that fewer than 1,000 people took up on. Mostly because pretty much everyone seemed to think that registration is a good idea given the massive explosion in drone numbers. If drones go missing or run into trouble, their owners can be identified from the quadcopters' serial numbers and contacted or investigated as necessary. The database holds the operator's name, address, and email address, for each flying gizmo as well as the hardware's make, model, and serial number, and an assigned ID number.

The Small UAV Coalition, whose members include Amazon, Google and a number of drone-specific companies, as well as the Association for Unmanned Vehicle Systems International (AUVSI) – which is the world's largest unmanned systems and robotics industry group with over 7,500 members – both expressed disappointment with the court decision. The Academy of Model Aeronautics (AMA) also believes that drone registration is a good idea.

"A registration system is important to promote accountability and responsibility by users of the national airspace, and helps create a culture of safety that deters careless and reckless behavior," the AUVSI argued at the time.

It said it would work with US Congress to come up with a legislative solution – and so it did. And that is one paragraph added to the annual defense bill that says simply that the drone registration system "shall be restored" when it is signed into law.

As such, as soon as President Trump signs the bill, the drone requirements are back on. And that means if you have anything but the smallest toy quadcopter you will need to pay your $5, register it with the FAA, and then attach the assigned ID number you'll be provided with to your drone. That number links your drone to your name and address.

The law was signed off on Tuesday, prompting the Small UAV Coalition to thank Congress "for restoring FAA authority to maintain a national UAS registry for both commercial and recreational operators, a critical mechanism for safety and accountability." It said it would also work with Congress on future laws for "remote identification and tracking standards that will be critical to ensuring safe integration and unleashing the potential for increased and expanded commercial UAS operations."

Or, in other words, the days of model aircraft being flown anonymously by hobbyists – sometimes drunk, sometimes dangerously inept, and possibly peeping toms – is rapidly coming to a close. ®