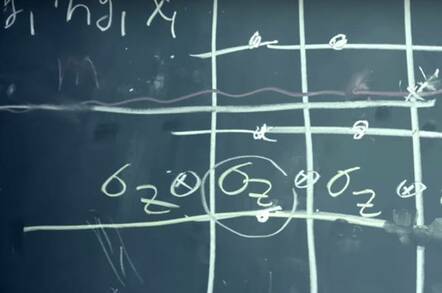 Those without access to a quantum computer can console themselves with Microsoft's Quantum Development Kit, introduced as a preview release on Monday.

Quantum computing has been around as as a plausible idea since the 1980s, based on earlier theoretical work on quantum information systems. But it would take until 2011 before the Canada-based D-Wave released D-Wave One, the first commercially available quantum computing hardware.

The company's current model, the D-Wave 2000Q, has been estimated to cost about $15 million. And there are now rivals, such as Quantum Circuits and IonQ, not to mention work going on at Google, IBM, Intel, and Microsoft.

"What problems will be solvable with a computer that computes in a billion parallel universes at the same time?" asks Charlie Marcus, professor and director of QDev and principal researcher at the Microsoft Quantum Research project at NBI, University of Copenhagen, in a Microsoft video.

Certainly such a computer could solve retirement worries, even if sold at half-price, but apart from that no one knows is sure what will be done with it. IBM research published earlier this year suggests that classical supercomputers still outperform quantum computers.

But in the next few years, there's hope that quantum systems will be able to handle calculations too daunting for current hardware, like making public key encryption useless or tallying politicians accused of impropriety.

"Quantum computing will enable us to solve problems that take longer than the lifetime of the universe in seconds, hours, or days," insists Krysta Svore, principal researcher at Microsoft Research and manager of the company's quantum architectures and computation group.

According to Svore, work on simulators suggests quantum algorithms will be able to find patterns in data more rapidly than other approaches, which could help machines recognize speech, language, and objects better than they do at present.

In preparation for that time, Microsoft would have developers practice their quantum coding chops, which might not be a bad idea for those planning to work for NASA, the NSA, other the handful of other large organizations dipping their toes into the rarified world of quantum calculations.

Talked up at its Ignite conference in September, the Quantum Development Kit is integrated with Microsoft Visual Studio, but instead of writing in C#, devs use a language called Q#.

It's not for the faint-hearted, requiring familiarity with the principles of quantum computing and with linear algebra. Instead of a "Hello, World!" starter project, forward-looking devs can try their hands at demonstrating quantum superposition and quantum entanglement using a Bell State.

Microsoft is thoughtfully providing various learning resources, to make the whole business a bit less baffling. Company co-founder Bill Gates is among those who admit that quantum computing is difficult to understand.

In Microsoft's blog post on the subject, Svore expresses the hope that subjects like quantum teleportation – sharing information through quantum entanglement, not to be confused with Star Trek-style matter transmission – will prove intriguing enough to pique the interest of programmers. ®