Serious storage capacity is coming to tablets, smartmobes ... and beyond 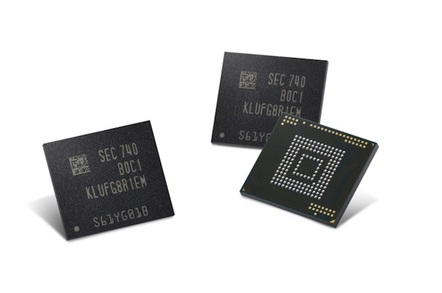 Samsung has doubled the size of its largest Universal Flash Storage (eUFS) product to 512 gigabytes and started mass production of the chips.

Samsung pitched previous generations of this kit at cars, which are expected to soon need to record a lot of sensor data, a VM or three to power various systems, some content for the entertainment system and much more.

With today's announcement, it has named “upcoming flagship smartphones and tablets” as the ideal application.

Another possible market is the imminent Microsoft/Qualcomm Windows-10-on-ARM laptops. The Register understands these devices will all-but-expect an LTE connection but will not be made worse by 512GB of power-sipping storage.

The 64-layer V-NAND chips should also do well in other embedded devices, which are expected to soon proliferate as 5G networks create possibilities for sophisticated devices in a great many locations. A decent slab of storage seldom goes astray: now it's easy to acquire.

Speed is sufficient for most application: Samsung has promised “sequential read and writes reaching up to 860 megabytes per second (MB/s) and 255MB/s respectively” and random data access speeds of 42,000 IOPS when reading and 40,000 IOPS when writing.

Samsung also said it “intends to steadily increase an aggressive production volume for its 64-layer 512Gb V-NAND chips, in addition to expanding its 256Gb V-NAND production. This should meet the increase in demand for advanced embedded mobile storage, as well as for premium SSDs and removable memory cards with high density and performance.” ®

Clue's in the headline. And more importantly: Will anyone but Cupertino care?