You can probably strike these toys off your kids' Crimbo lists 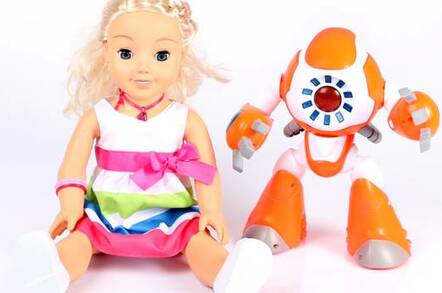 The French data protection agency has issued a formal notice to a biz peddling allegedly insecure toys, just in time for Christmas.

The mass-marketed toys in question – Genesis Toys' My Friend Cayla doll and i-Que robot – are Bluetooth-enabled so they can capture and analyse children's speech through an app on – ideally – their parents' mobile phones.

But the toys' security is lax, to say the least, in that anyone nearby can pair with the device unchecked – and once they do, they're able to listen and record conversations between child and toy.

Moreover, would-be dodgy characters don't even need the Cayla or i-Que app installed, because phones simply identify the doll as a hands-free headset.

The French agency, CNIL, said its controllers had found that anyone within nine metres of the toy, even outside the building, can pair a mobile phone with the toys "without having to log in (for instance, with a PIN code or a button on the toy)".

It added that it was also possible to communicate with the child through the toy, either by using a hands-free kit or by sending a pre-recorded message from the phone.

The agency said the toys were in breach of Article 1 of the French Data Protection Act, which provides that technology "shall not violate human identity, human rights, privacy, or individual or public liberties".

However, it's not clear whether the formal notice – which isn't a sanction but could be followed up with a full investigation – will spur Genesis Toys into action, given the devices have already been outlawed in Germany.

The German telecoms regulator banned the sale of the dolls in February, on the grounds that the devices violate privacy laws because they can illegally transmit data collected without detection.

And US authorities have also raised concerns, with several consumer complaints being lodged with the Federal Trade Commission, including from the Electronic Privacy Information Centre (EPIC).

EPIC said last year that "the failure to employ basic security measures to protect children's private conversations from covert eavesdropping by unauthorized parties and strangers creates a substantial risk of harm because children may be subject to predatory stalking or physical danger".

Cayla is also listed in this year's annual Trouble in Toyland report (PDF) from the US Public Interest Research Group, a federation of consumer nonprofits.

It listed the doll as the main example for the privacy threat posed by Internet of Things toys, although it should be noted that there is no end of creepy, privacy-invading playthings on the market right now.

Elsewhere in CNIL's complaint was that Genesis Toys' privacy statement (last updated on February 23, 2015) didn't make it clear what the data collected by the toys would be used for.

This echoes concerns raised by the European Consumer Organization BEUC, which has previously pointed out that "Cayla will happily talk about how much she loves different Disney movies, meanwhile, the app-provider also has a commercial relationship with Disney".

After all, the toy industry's product-pushing ways are for life, not just for Christmas. ®