Lauri Love appeal: 'If he's dead, no victim's going to get anything' 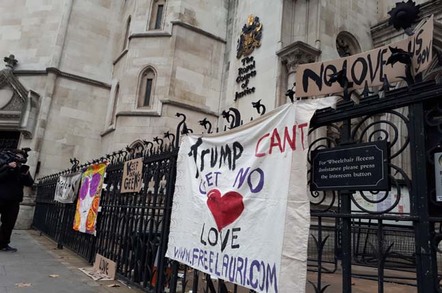 Accused hacker Lauri Love is at a strong "likelihood of suicide" if extradited to America – and that a formerly anonymous co-defendant was tried at home in Australia is good reason for Love to be treated the same way, defence barrister Edward Fitzgerald QC told the High Court today.

Defence barrister Edward Fitzgerald QC told the court that one of the three unnamed co-defendants referred to in the New Jersey indictment against Love is Justin Michael Soyke, who was found guilty by an Australian court of various Anonymous-related hacking offences in 2015 when he was aged 19.

"Soyke was in fact dealt with in his home country of Australia for his role in these offences targeting the US from his Australian-based computer," said Fitzgerald, adding there is "no reason" Love couldn't similarly be prosecuted at home in the UK. It was said that American prosecutors did not request Soyke's extradition from Australia.

Setting out Love's own grounds for appealing against being sent to the US to stand trial on multiple charges of hacking US government agencies' servers, Fitzgerald emphasised the fragile state of Love's mental health, as testified to by a number of experts.

The hush before kick-off

Love entered the sombre oak-and-velvet Court 4, with its dusty bookcases and tiered benches, around 20 minutes before proceedings were due to start. Wearing a white shirt and a plain dark suit with no tie, he was flanked by his parents, the Reverend Alexander Love, who was wearing his clerical collar, his mother Sirkka-Liisa, and his girlfriend Sylvia. Ruddy-faced Lauri sat with his eyes closed as the courtroom slowly filled.

The well of the court was filled with around 40 of Love's friends and family, along with another couple of dozen campaigners supporting him in the public gallery. Bewigged barristers dressed in flowing black robes, discussing their bundles of documents, gradually grew quieter as more people filed in, reducing to whispers.

Defending Love were barristers Edward Fitzgerald QC and Ben Cooper, both of Doughty Street Chambers, while barrister Peter Caldwell will appear for the Crown Prosecution Service, which is acting on behalf of the US government, as is normal in US extradition cases.

Fitzgerald also drew attention to the "inhuman" conditions in the two American jails Love is most likely to be sent to if extradited: the New York Metropolitan Detention Centre (MDC) and the same city's Metropolitan Correctional Centre (MCC).

"There are three main reasons why Lauri Love should not be extradited. The first is the health reason. The learned magistrate found that he had had a lifelong Asperger's condition, that he suffered from depression, and indeed Professor Kirkwell's evidence was that he suffered from it from the age of 15," said Fitzgerald, adding that "at times" Love was "verging on psychosis".

Love's defence team argued that conditions in the prisons would be completely unsuitable for Love, who has suffered from both asthma and eczema since childhood and has also been diagnosed with depression.

Fitzgerald quoted at length from a statement by former American senator Pedro Espada, a serving prisoner in the MDC. Espada had been assigned to watch another prisoner at risk of suicide. That man managed to defecate in his cell, smear it around, cut his wrists, thighs and genitals, and then start smearing his own faeces into the cuts. Espada called for help and asked prison guards to clean the cell, but, it was said, the cleaning did not occur for seven days.

Love's team also referred heavily to the forum bar, formally known as section 83A of the Extradition Act 2003. Subsections (3)(a) to (3)(g) were subject to intense discussion between Fitzgerald and the two judges, Lord Chief Justice Sir Ian Burnett and Mr Justice Duncan Ouseley. Fitzgerald argued that Love could be tried in the UK ("the evidence is portable") and that he has strong connections to Britain, factors that should count in his favour.

He told the two judges that it would be "unjust and oppressive in light of his physical and mental health and risk of suicide" to send Love abroad for trial, arguing that "there was no evidence suggested by the prosecutor that the most appropriate venue was not the United Kingdom".

Fitzgerald added: "On a pragmatic level, the very fact of being taken away from England exposes him to a high risk of suicide. If he's dead, putting it bluntly, no victims are going to get anything from a trial. If he's severely unfit, again, they won't get any benefit from a trial."

Previous findings of District Judge Nina Tempia, namely that sending Love abroad for trial would not cause a "serious and permanent deterioration in the appellant's mental health", should be cast aside, Love's barrister urged the court. He quoted from an expert report by Dr Michael Kopelman, emeritus professor of neuropsychiatry at King's College London, which said that the "trauma of the extradition and of Mr Love's separation from his family... would produce in Mr Love a very high risk of persisting permanent psychological damage".

The court also briefly heard from human rights pressure group Liberty's barrister before adjourning for lunch. With Love's team's opening statement completed, the court will now hear from Liberty and then from the Crown Prosecution Service, which is acting on behalf of the US government.

'Now is the winter of our disk contents'... Decision on Lauri Love's seized gear due next week