Night before Xmas and all through American Airlines, not a pilot was flying, thanks to this bug

Vacation system gremlin gives everyone who asked time off 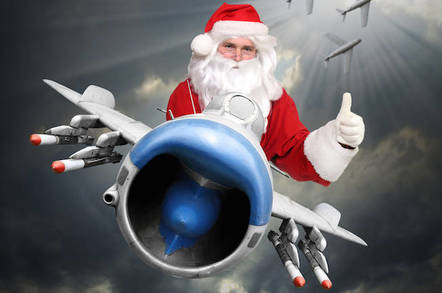 Updated A bug in American Airlines' pilot scheduling software has left the US airline woefully understaffed for the coming month, particularly around Christmas week.

Due to a gremlin in the code, all pilots who requested time off for the holidays were granted leave, whereas the system should have approved some and rejected others to ensure there were enough staff available to run scheduled flights.

Thanks to this glitch, roughly 15,000 flights scheduled from December 17 to the end of the year, throughout the US, are potentially without any assigned pilots, and may face being cancelled unless people volunteer to fill in. To get the fly boys back on the job and avoid axing flights, American Airlines is going to pay them 1.5 times their normal wage to get passengers in the air.

"We are working diligently to address the issue and expect to avoid cancellations this holiday season," a spokesperson for the airline told The Register today.

"We have reserve pilots to help cover flying in December, and we are paying pilots who pick up certain open trips 150 percent of their hourly rate – as much as we are allowed to pay them per the contract. We will work with the APA [pilots' union] to take care of our pilots and ensure we get our customers to where they need to go over the holidays.”

The pilots' union, APA, meanwhile, is less than happy about the scheduling cockup and the airline's handling of the matter. In particular, it has a bone to pick with AA's resolution, which they claim was crafted without consulting union officials and lacks guarantees on pay rates.

"By not including APA in developing collaborative solutions to this critical holiday scheduling failure, management’s actions contrast with their handling of previous scheduling failures involving other work groups," the union said on Tuesday.

"This stands in direct opposition to the company mantra of 'Validating the Trust' and the stated goal of making culture a competitive advantage. Management’s actions likewise jeopardize any collaborative effort to ensure our passengers have a pilot crew to take them to their important holiday events."

Can you shed any light on the cause of the software glitch? Drop us a line, or hit us up anonymously and securely on Ricochet: ricochet:qk724lftsymjcwlq ®

A spokesperson for American Airlines has been in touch to say "a few hundred" flights remain at risk:

Out of the 200,000 flights American will operate in December, only a few hundred are currently unassigned to pilots. That number of open flights continues to decrease thanks to our pilots who are stepping up to the plate and picking up trips to ensure customers are taken care of. It’s another example of why we are thankful to have such an incredible team. In addition, we have more reserve pilots on hand in December than normal months and they provide us with the ability to fly many of the trips that are currently uncovered. We have not canceled any scheduled flights in December and will continue to work to ensure both our pilots and our customers are cared for.

It is believed the scheduling software cocked up for a few hours, and during this time, any pilot could remove themselves from their flights if they wanted time off over Christmas, leading to the staffing shortfall.

Why the Sun is setting on the Boeing 747

It can't get any better, basically

Interview You need spectrum – and find something better to spend £92m on, will ya?